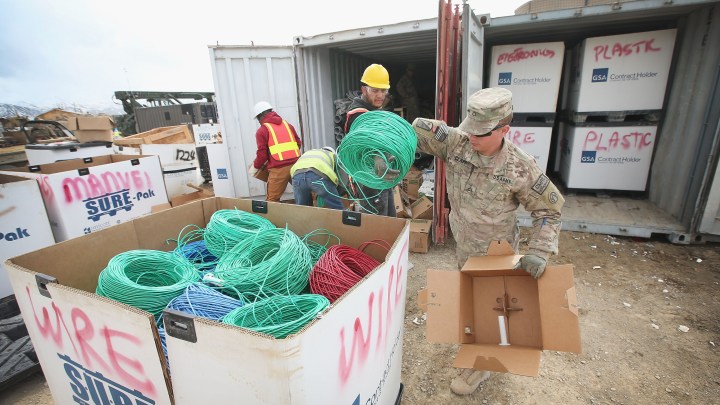 At just short of 20 years, the conflict in Afghanistan was America’s longest war. More than 2,000 U.S. service members were killed there. The U.S. spent billions over the years to sustain its troops in Afghanistan and hired military contractors to feed and house them.

Those contractors profited the most from the war, but those systems can lead to fraud and waste. The U.S. military relied on contractors like KBR and DynCorp International for all sorts of things in Afghanistan.

“For cooking, for driving, for delivering supplies — they were used across the board,” said Linda Bilmes, who teaches public policy at Harvard. She said that, sometimes, the Pentagon had so-called no-cost deals with contractors. Whatever a project cost, the government would pay.

“The whole system was set up in a way to enable contractors to rip off the government,” she said.

One contractor, Supreme Foodservice, pleaded guilty in 2014 to overcharging the U.S. military for food and water served in mess halls in Afghanistan. There were also what are called no-bid contracts, in which companies are hired without having to compete with other firms on things like price, said Mark Cancian at the Center for Strategic and International Studies.

“We didn’t have a good sense of what it was going to cost, and we didn’t have the people there who could do the negotiations or had the data, so contractors were basically able to charge whatever they wanted,” Cancian said.

Eventually, that changed and the Pentagon started negotiating better contracts, Cancian said. He also pointed out that it’s very expensive to hire experienced people, like former military officers, to provide training and security.

“You would see all these people who were obviously contractors, and we all knew they were making a lot more money than we were,” said Dan Grazier, who served with the Marines in Afghanistan and is now at the Project on Government Oversight.

They also have job security; the U.S. military has decided it wants contractors in the field right next to U.S. troops.