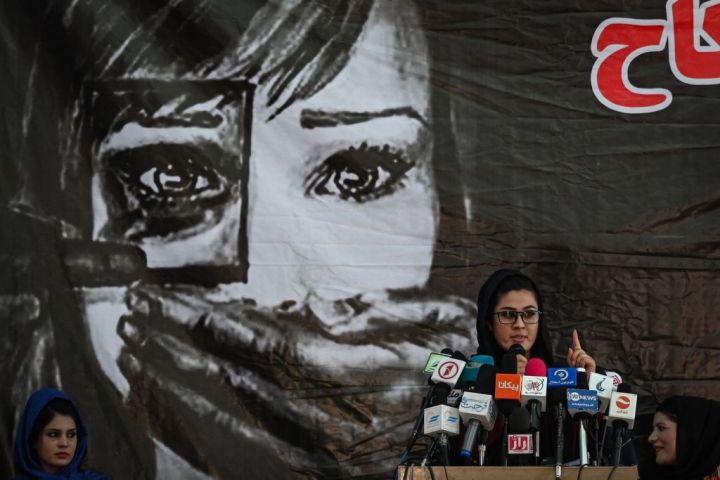 COPY
A social worker address Afghan women gathered at a hall in Kabul on Aug. 2, 2021. SAJJAD HUSSAIN/AFP via Getty Images

The situation is still fluid and chaotic in Afghanistan, as the Taliban continue consolidating power over the country and the capital, Kabul. Afghans with connections to the U.S. Embassy or military over the past 20 years are still hoping to get out of the country. But many who stand to lose rights and jobs and possibly their freedom under a new Taliban regime are hunkering down, hiding, covering their tracks.

That includes women, and when it comes to women’s freedom to participate in society and the economy, people who’ve been observing the Taliban aren’t optimistic.

“The Taliban are no friends of girls and women. And for many years they really had control over the country, girls education and women’s education was forbidden,” said Rebecca Winthrop, who co-directs the Center for Universal Education at the Brookings Institution. Winthrop helped get Afghan girls into new government schools after the Taliban fell in 2001.

She said the U.S. has invested more than $700 million in girls’ and women’s education, and attendance has increased. So has Afghan women’s participation in the labor force — up from 15% to nearly 22%.

But where the Taliban have taken control in recent years, Winthrop said, “we were seeing girls not being able to go past seventh grade – which is when they hit puberty; bombing girls schools; targeting female teachers.”

In the big cities, many women have gone to university and entered business, government, academia and the media. But now “they’re literally finding safe houses where they can hide,” said Elisa Lees Munoz, who directs the International Women’s Media Foundation — which trains women journalists in Afghanistan. She doubts most of them will be able to keep working.

“And it’s not just their livelihood, but it’s the reporting that they would have done. Who is covering maternal health? Who has access to speak to half of the population?” said Munoz.

The Taliban may still find it challenging to reimpose repressive religious rule across the country, said Gayle Tzemach Lemmon at the Council on Foreign Relations, because Afghan society has changed.

“Two thirds of the country is under 25, they have no recollection. They are young women, just like your daughters, your sisters, who grew up thinking they could be teachers, doctors,” she said.

Lemmon points out more than half of students admitted to one major Afghan university this year, were women.