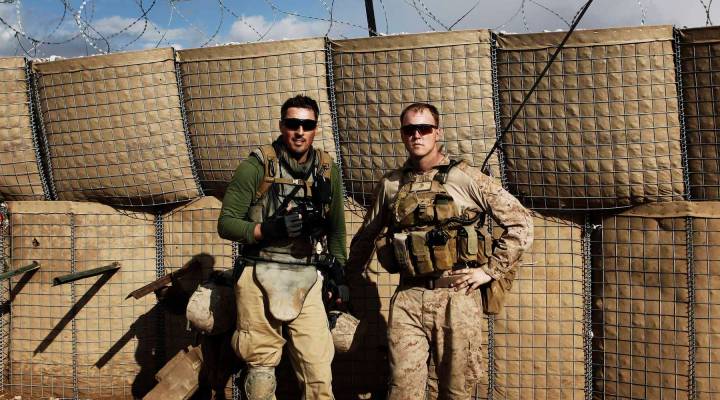 Before his assignment in Helmand Province, Afghanistan, photographer Finbarr O’Reilly had worked in conflict zones around the world. T.J. Brennan, a Marine, was hoping to make a career out of the military. Shortly after meeting in 2010, O’Reilly and Brennan were caught in a firefight with the Taliban and Brennan received a career-ending brain injury. Through his friendship with O’Reilly, Brennan eventually became a journalist and founded The War Horse, a nonprofit news site that covers the departments of Defense and Veterans Affairs.

O’Reilly and Brennan detail the struggles they faced with medical and mental health challenges they brought home with them from Afghanistan in their new book, “Shooting Ghosts: A U.S. Marine, a Combat Photographer, and their Journey Back from War.” The following is an edited transcript of their interview with host Kai Ryssdal.

Kai Ryssdal: T.J., give me the story of how you guys met, would you?

T.J. Brennan: So it was around October of 2010. I had been in Afghanistan for about three months at that time. We’d just gotten done doing a push through a town. We walk up this hill carrying all of our gear, just hundreds of pounds of stuff. And then we come in and drop it, and I see this gaunt man sitting in the corner —

O’Reilly during his embed with Brennan’s 1/8 Battalion in Helmand in 2011.

Brennan: And I just walked up to him and said, “Who are you?” And he said he was with Reuters. And I thought that was a government contract agency that I hadn’t heard of before —

O’Reilly: I had to explain that I was a journalist, a photographer there to make them famous.

Ryssdal: So Finbarr, the subtitle of this book, the second headline if you will, is “A U.S. Marine, a Combat Photographer, and Their Journey Back from War.” But the key event is when T.J. gets injured, and I want you to tell me about that day and what you saw.

O’Reilly: We’d been out on a number of patrols, foot patrols through the area, which was a Taliban stronghold. And on the day that T.J. got injured, the Taliban attacked in an ambush. And T.J. and another Marine were running up to reposition themselves further ahead of where I was stationed inside a compound for cover when we heard another explosion. And we thought it was T.J. stepping on an improvised explosive device, but it turned out that it was an Afghan national police member who was with the Marines and misfired his rocket and it hit a telegraph pole above T.J., knocking him out. And I was actually photographing this. So we have the whole kind of sequence of that happening. You know the Marines who ran to the position where T.J. was knocked out and reviving him and helping him to stagger back into the compound where I photographed him sort of falling down to his knees and then being administered first aid by a Navy corpsman who was there.

Ryssdal: The thing that got this book to my attention for this program, T.J., is that that moment — and you say you don’t know whether you’d have been a career Marine or not and you had problems with bureaucracy and the stupidity of the Marine Corps and, you know, all of that — but it seemed to me that that was the moment when that RPG hit when your life changed, obviously, but also the idea of this job that you had of being a Marine and Finbarr, for you too, really, as a photojournalist, as a combat photojournalist. That job was in a way taken away from you.

Brennan: Yes it was. I didn’t realize that at the time that my military career was going to end because of that explosion. I actually clung to hope for a long time that things would get better, which my doctors told me they would, and that I would be able to salvage my Marine Corps career, and I wanted to go be a combat instructor at the school of infantry. I didn’t think it would be a career-ending injury. But then when I found out it was, that’s when things got very difficult, because I knew it was out of my hands.

Ryssdal: And just to fill in some of the gaps, I mean, you went through treatment and depression and more treatment. There was a suicide attempt. All of which took a toll on your domestic life and your family life because of this this one thing that happened.

Brennan: Yeah, so when I first came home, March-April time frame of 2011, I — the doctors for the revaluations back in the United States, they told me that I was going to be OK and that things would improve — and then they said you know, things are not going to improve, we’re going to refer you to a medical board, um… I forget where you were going with that.

Ryssdal: Well, it’s about the change that got forced upon you —

Brennan: Oh, where I was going —

Ryssdal: Yeah. Where you were going. But you know what, that’s OK. It’s about how things change. But Finbarr, let me ask you how you guys reconnected, or, well, I mean, you stayed in touch, but you really reconnected sort of in the anecdote at the beginning of this book.

O’Reilly: Yeah. When I left T.J. in Afghanistan, I kind of thought that might be the end of the story. I’d met many subjects who I’d photographed over the years that I spend a chunk of time with that’s very intense at the moment, and you don’t always expect to see them again. But we did reconnect through writing, and he ended up writing a piece for The New York Times about what it was like to be on the other side of my camera. And that sparked a kind of communication between us when T.J. decided he wanted to start writing about his experiences and the challenges of seeking mental health in the military. And when he sent me that first piece, I was impressed by how raw and emotive it was. And I thought,”Wow, he has really something interesting to say here. And if he were willing to share it beyond just with me and for his own sort of processing of his experiences, then it could have real value for others who are going through similar things.”

T.J. Brennan, left, and Finbarr O’Reilly reunited at the Rock in Randolph, Massachusetts, in 2012.

Ryssdal: T.J., let me pick up on that for a minute, because Afghanistan is again in the news this week. You have had the experience of going there and being injured and coming back, and I feel obliged to ask you, since you now have this platform, about the disconnect between the civilian and military sides of this society as we enter, I think, year 17 of the war in Afghanistan.

Brennan: I — so the book touches on a whole lot of difficult topics that are — it’s tough to talk about them. And I hope that when people put down the book and they finish reading it that it helps to reframe the conversation about the positive aspects of military service that don’t otherwise get talked about. I mean, we have veterans each and every day that are absolutely crushing it in academia and social impact and entrepreneurship. Yet it seems more often than not the headline in the newspapers is the crazy vet that shoots somewhere, whereas I would make the argument that veterans are drastically outperforming a lot of their civilian counterparts.

O’Reilly: I think one of the main reasons really for us writing the book, and certainly for T.J., I know, and from our conversations, is that he wanted to bridge this gap between the the civilian experience or idea of war and the military experience. And so by putting these things together and comparing our experiences, we were able to really kind of bridge that gap between what civilians think war is and what it really might be like.