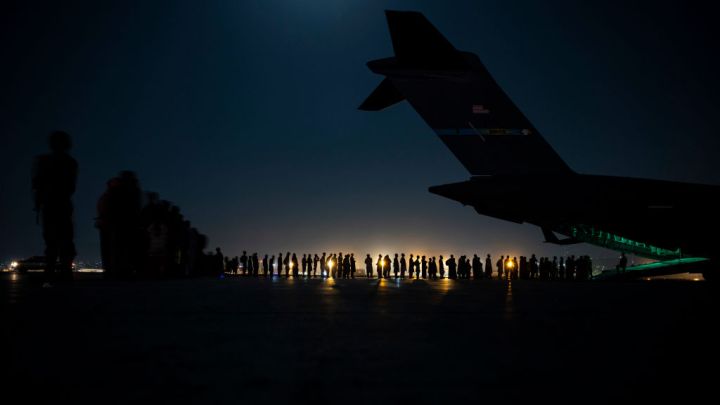 COPY
KABUL, AFGHANISTAN - AUGUST 21: In this handout provided by the U.S. Air Force, an air crew prepares to load evacuees aboard a C-17 Globemaster III aircraft in support of the Afghanistan evacuation at Hamid Karzai International Airport on August 21, 2021 in Kabul, Afghanistan. Taylor Crul/U.S. Air Force via Getty Images

KABUL, AFGHANISTAN - AUGUST 21: In this handout provided by the U.S. Air Force, an air crew prepares to load evacuees aboard a C-17 Globemaster III aircraft in support of the Afghanistan evacuation at Hamid Karzai International Airport on August 21, 2021 in Kabul, Afghanistan. Taylor Crul/U.S. Air Force via Getty Images
Listen Now

The federal government, nonprofits, media organizations and private contractors are still trying to get people out of Afghanistan and away from the threat of Taliban retaliation for assisting Americans during 20 years of war.

If they can get out, many are eligible for Special Immigrant Visas to live in the U.S. That means there are efforts to find housing for these people in a hurry.

For some context, consider Lutheran Social Services of the National Capital Area, which helps resettle refugees and people coming in on Special Immigration Visas. Last year, it served about 500 people, mostly Afghan SIVs.

The group is already on track to serve 500 people just this month, “because the Afghan allies have, by definition, assisted the U.S. military and U.S. missions, many of their contacts are in the D.C. metro area,” said Kristyn Peck, CEO of the group.

Finding apartments for everyone is one of Peck’s biggest and most expensive challenges –the D.C. area isn’t cheap.

“A lot of our budget gets spent on housing,” she said.

Other resettlement groups are worried as well. Even though they’re being flooded with donations and volunteers, at the end of the day, what they really need, is apartments.

“Because one thing that’s complicated is somebody who arrives, has no history, has no credit, has no social security card,” explained Alicia Wrenn with the refugee resettlement group HIAS.

That makes it tough to find landlords willing to take a chance, even though people coming in on SIVs receive a stipend of about $1,200 a person.

One solution many groups are turning to in the short-term? AirBnB.

“We are prepared to provide housing to thousands of Afghan refugees as part of their resettlement journey in the United States,” Christopher Nulty, director of corporate affairs and communications at the company.

Nulty says AirBnB placed more than a hundred families over the weekend.

“We’re starting with short-term stays, because right now, there’s just sort of a real need to just get people into the country, we will certainly extend those stays if the need exists,” he said.

For now, he said, the company is relying on the nonprofits it’s working with for guidance in the steadily changing situation.