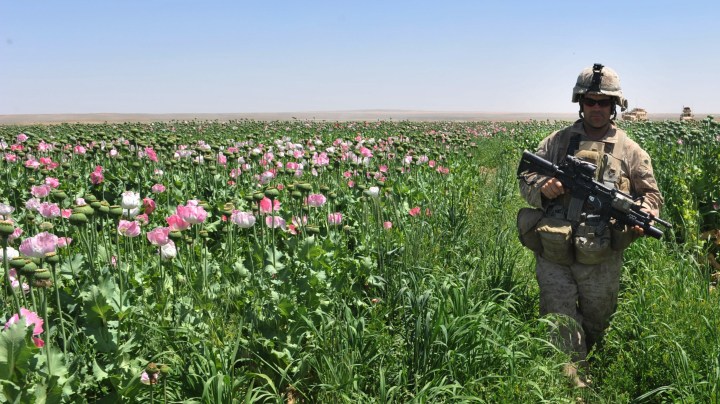 COPY
A U.S. Marine sergeant patrols in an Afghan poppy field in 2011. With many farmers dependent on the opium trade, Jeffrey Clemens says, "the effort to win hearts and minds" was set back by the U.S. eradication program. Bay Ismoyo/AFP via Getty Images

A U.S. Marine sergeant patrols in an Afghan poppy field in 2011. With many farmers dependent on the opium trade, Jeffrey Clemens says, "the effort to win hearts and minds" was set back by the U.S. eradication program. Bay Ismoyo/AFP via Getty Images
Listen Now

Despite the U.S. spending approximately $8.97 billion over the past two decades trying to eradicate Afghanistan’s illegal drug trade, it remains the world’s biggest supplier of illicit opium and the crop remains an important source of funding for the Taliban.

Jeffrey Clemens, an associate professor of economics at the University of California at San Diego, spoke with “Marketplace” host Kai Ryssdal about the economic fundamentals that helped doom the U.S. effort to suppress opium production in Afghanistan and what it means for the Taliban’s power. The following is an edited transcript of their conversation.

Kai Ryssdal: Can we do a little ground truth here before we dig in? Drug trafficking and the Afghan economy — contextualize that for me.

Jeffrey Clemens: Sure. According to the United Nations, in 2020, Afghan farmers would have received something on the order of $500 million associated with selling the opium that they’ve cultivated, and the estimated value of the heroin and other opiates as they cross the border out of Afghanistan and into other countries is somewhere on the order of $2 billion. So, that amount accounts for something like 10% of its overall [gross domestic product].

Ryssdal: OK, here’s the thing: The American government spent billions of dollars over the past 20 years trying to eradicate the opium trade. Obviously, it has failed. First of all, was that a fool’s errand?

Clemens: Yes. I think it was a fool’s errand, in large part because the cultivation of opium poppy by Afghan farmers and the trafficking of that opium and heroin out of the country is something that, unfortunately, just has made sense in terms of economic fundamentals within Afghanistan. Should I take a minute to unpack that?

Clemens: Sure. So you know, when we think about why Afghanistan has played such a major role in the global trade in opiates, there are a few, you know, in some ways, very mundane reasons why that’s the case. So for one, the agricultural land in Afghanistan is not that great, and opium poppy turns out to be a pretty hardy crop. The second issue is that the infrastructure in Afghanistan is quite bad, which means that there’s more risk than you might expect for cultivating relatively perishable crops. Opium tends to be relatively nonperishable, and it’s also pretty lightweight for the cash value. And then finally, opium poppy is incredibly labor-intensive to harvest. And so an economy like Afghanistan’s, where there, you know, isn’t a lot of high-tech capital associated with the agricultural sector, ends up being a place where opium poppy tends to thrive. And so the U.S. and international effort to suppress the opium trade is trying to push against all of these, you know, pretty basic economic fundamentals, making it, as you said, a fool’s errand.

Ryssdal: Right, right. You can’t sort of beat the market, as it were, right?

Ryssdal: So, now the Taliban is in charge for the second time in 20 years. A lot of the revenue that they get from opium — to be had from opium, rather — is about taxation. Do I have that right?

Clemens: That’s correct. So, there’s sort of a mix of things, you know, which are understood to varying degrees. First, it just straight up taxes farmers in the same way that you might expect any other government to tax farmers or other producers. The part on which there’s sort of less information is, you know, the extent to which the Taliban or its affiliates are directly involved with the kind of trafficking stage of getting the processed opium and heroin out of the country. There’s probably a mix of tangential involvement, but also just continuing to kind of tax the trafficking organizations that are actually executing the process.

Ryssdal: Right. The question is, have they vertically integrated the Afghanistan opium industry? Is that the deal?

Ryssdal: Do you suppose — and look, this is one of those unknowables, but I’m gonna ask it anyway — do you suppose things might have been different for our effort there if the United States had thought about opium a little bit differently?

Clemens: I do think so. Although, of course, it’s very hard to, you know, quantify how important that might be. But the, you know, in the mid-2000s, the U.S. substantially increased its expenditure on the effort to suppress the opium trade. And what we saw after that effort increased was that the national production estimates, you know, barely budged. If anything, they sort of went up over the long run. But then, even more importantly, we saw that production of opium declined in the areas that the government did actually have control in, and they rose in the areas where the Taliban exerted more of its control. So, this is a really bad outcome in the sense that the opium-suppression effort, if anything, kind of increased the Taliban’s market power in the global opium trade.

Ryssdal: And now, of course, the Taliban is sort of reaping the benefits of that, right?

Clemens: That’s right. And, of course, on the more microlevel, you know, if you just think about the long-run effort to, you know, to win hearts, hearts and minds, so to speak, part of what’s going on in this process is that the opportunities for households that were inclined to cultivate opium poppy and that might have been favorably disposed to the government, they saw their opportunities reduced by the opium-suppression effort. Whereas the households in the Taliban-controlled areas, if anything, saw, you know, their opportunities rise. And so, you know, in addition to just the economics of how much is the Taliban profiting from the opium trade, the effort to win hearts and minds was also clearly kind of adversely affected by this effort.