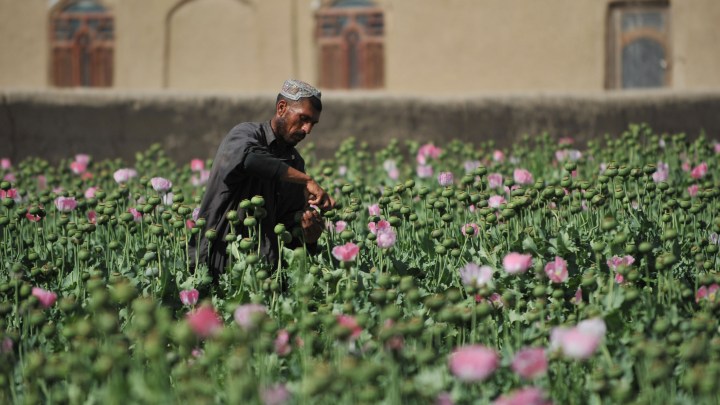 COPY
An Afghan opium poppy farmer at work in 2011. While the Taliban receives income from taxing opium, most of its recent income has come from taxes on legal goods. Bay Ismoyo/AFP via Getty Images

An Afghan opium poppy farmer at work in 2011. While the Taliban receives income from taxing opium, most of its recent income has come from taxes on legal goods. Bay Ismoyo/AFP via Getty Images
Listen Now

As the repressive Taliban regime takes Kabul and cements its control over Afghanistan, it will need to fund the operations of a government: military, schools, roads and all the things that a government does.

The Taliban has an economic engine that has propelled it this far. The question is whether it will be enough to govern with. The Taliban itself is well-funded.

“The estimate has been that the Taliban makes tens of millions of dollars a year, sometimes hundreds of millions,” said Vanda Felbab-Brown, a senior fellow at the Brookings Institution. A reasonable estimate would put the Taliban’s recent budget at $100 million a year, though she said some reports suggest it’s been as much as $1.6 billion.

The money comes from a lot of sources. Recently, Felbab-Brown said, their top source has been taxes in areas of the country they controlled. “Broadly, the Taliban has taxed everything from government projects to international trade,” she said.

At the border, the Taliban taxes food, fuel and goods. Inside the country, it even taxes cellphone towers, on penalty of blowing them up. Kidnapping for ransom and the opium trade have also bankrolled the Taliban.

“It’s much less significant than the trade in legal goods,” said David Mansfield, a researcher and expert on Afghanistan’s drug trade.

His research in one southern province, which he calls a major drug conduit, suggests income from taxing the opium, heroin and methamphetamine trade was about 9% of the Taliban revenue there.

But as much money as the Taliban makes, it’s a lot less than the budget of the Afghan government before it — which was around $11 billion in 2018 for a country roughly the size of Texas — 75% of which came from international aid. That doesn’t necessarily mean donor countries will have a lot of leverage with the Taliban though, per Matthew Levitt with the Washington Institute for Near East Policy.

“I think the Taliban is not going to feel the kind of financial pinch that some in the West expect it will because it doesn’t need or feel the obligation to provide the level of services that the Afghan government did when it was supported by the West,” Levitt said.

Meanwhile, the Taliban has been building or repairing relationships with former enemies over the past few years — including China, Russia and Iran.