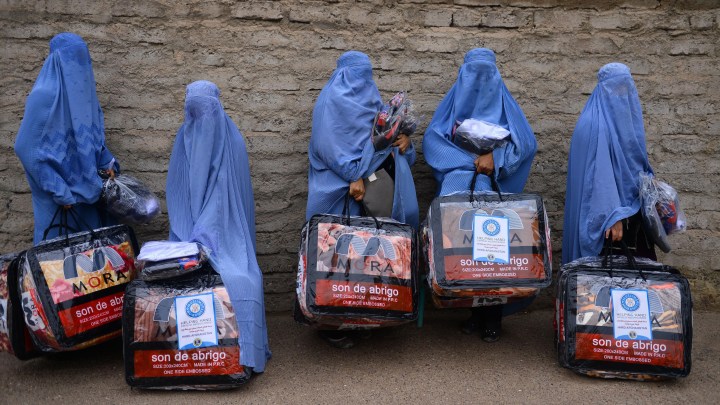 COPY
Afghan women stand with items received from a charity in Herat in December 2019. STR/AFP via Getty Images

Afghan women stand with items received from a charity in Herat in December 2019. STR/AFP via Getty Images
Listen Now

There’s a whole lot we don’t know yet about what’s happening in Afghanistan and what will happen to the people and the economy there under the Taliban.

One thing we do know, however, is that there is and will be a need for humanitarian support. Much of that’s been provided in past crises by a variety of intergovernmental and nonprofit organizations, and now they have to figure out what’s next, too.

Those countries and groups that had been funding aid to Afghanistan are now reevaluating their policies.

“The standard response is that when a government is in power that donors don’t like and don’t want to support that they circumvent that government” said Susanna Campbell, who runs the International Policy Implementation Lab at American University.

Donors can do this by routing funding through humanitarian groups like the International Committee of the Red Cross.

Its hospitals are flooded with new patients from all the recent fighting, according to spokesperson Crystal Wells.

“Our budget in Afghanistan currently is around $86 million, and we actually have a funding shortfall of about $33 million,” Wells said.

The ICRC has been working in Afghanistan for more than 30 years, and Wells said that’s possible because the organization stays neutral.

“We have been working in Taliban-controlled areas for years, and we do have a positive working relationship both at the top level and at the local leadership level,” she said.

That makes a lot of sense, said American University’s Campbell, because now that the Taliban is in charge, it has to provide some social services.

Right now, many nongovernmental organizations are trying to evacuate staff from Afghanistan.

“The Taliban have also been very sensitive to the influence that some of these outside organizations might bring” by advocating for civil rights for women, minorities and other oppressed groups, said Jason Campbell, a policy researcher at Rand Corp.