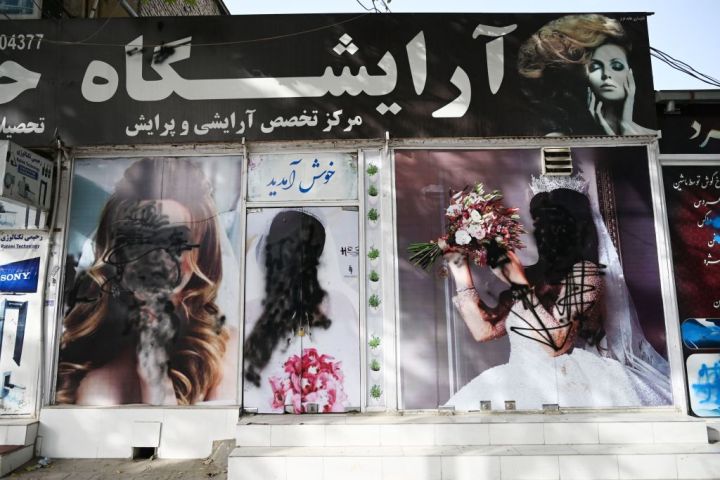 COPY
Images of women at a beauty salon in Kabul are defaced with spray paint. Wakil Kohsar/AFP via Getty Images

Images of women at a beauty salon in Kabul are defaced with spray paint. Wakil Kohsar/AFP via Getty Images
Listen Now

In mid-August, the Biden administration made the decision to remove troops from Afghanistan, setting a deadline of Aug. 31 to fully withdraw combat forces from the country. Soon thereafter, the Taliban captured the capital city of Kabul, less than three weeks before the U.S. hoped to withdraw all troops.

The recent Taliban takeover has left the fragile economy at risk of collapsing. Since the U.S. announced its withdrawal from Afghanistan, the country has seen increasing inflation. With limited access to banks in the mostly cash-based economy, people are running out of money to buy food. Some economists believe that Afghanistan is weeks to months away from economic collapse.

“Marketplace” host Kai Ryssdal spoke to Asad Ejaz Butt, a macroeconomist based in Islamabad, about the situation in Afghanistan and what the future looks like for the Taliban government.

Kai Ryssdal: If I am in Afghanistan, and I’m trying to go buy a loaf of bread, how does all of this macroeconomic stuff affect me? Am I seeing inflation? Are prices going up? Can I get cash, if I need cash?

Asad Ejaz Butt: You would be able to get hold of cash, but that cash is losing its value very well quickly, which in more formal terms, is called inflation. And of particular concern is the food inflation. Of course, even though agriculture is still 26% of the Afghan economy, they depend enormously on food imports from Pakistan, from other regions of the world. So those food imports have to be financed by the dollar. And the dollar is no more there. So inflation is going to rise enormously in the next few months.

Ryssdal: Setting aside the politics of it, bearing in mind that you’re an economist, do you think the Taliban is equipped to manage an economy that is right now in crisis, and as you’ve written, close to collapse?

Ejaz Butt: I fear not. Governance is very sophisticated business. And if I don’t see, you know, the expertise and the skills within the Taliban ranks to run an economy, to make economic policies, they would have to rely on external sources. I don’t think the Taliban, the current setup of the Taliban, has the expertise to make economic policies or govern, you know, the executive branches of the government, which would be ultimately responsible for running the economy.

Ryssdal: It occurs to me as we’re having this conversation that, you know, I’ve asked you about timing and timelines once or twice. This is actually a generational problem. Right?

Ejaz Butt: Yes. So I don’t think the Taliban economy would be on its feet, you know, in the short term, and Afghanistan is a mess right now. And if Afghanistan has to stand on its feet economically, it would have to be a concerted effort, as I believe, you know, things will have to start from scratch, especially in the rural Afghanistan, which is massively underdeveloped. So these bigger cities like Kandahar, Herat, Kabul, they are still, you know, reasonably developed. But regardless of that, I think a lot of reconstruction, economic reconstruction, has to take place. And it has to be a concerted effort of all the regional forces, including, you know, a large role to play by Pakistan, India, Bangladesh. These neighboring countries will bring Afghanistan back on speed.

Ejaz Butt: The Taliban government, they’re, I think, already talking to the Pakistan government. They’ve had some conversations with leadership in Pakistan, of course, some behind the doors. Then, of course, some investments have to go into the economy to continue the economy. So I think in the short run, what the Taliban would do is, or what they should do, is to sort of infuse some confidence in the local business community to ensure that, you know, they don’t lose a lot of jobs, the business sector continues to function and there is absolutely no capital flight, because whatever capital is residing in the economy must continue to reside in the economy. I think in the long term, they would have to ultimately rely on the international community, on these multilateral agencies. With the Americans gone now, how supportive would the multilateral agencies be is something yet to be seen.