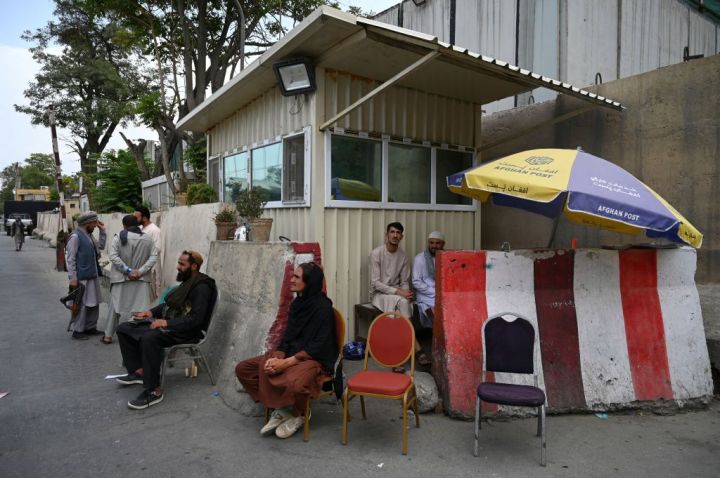 COPY
Taliban fighters stand guard in Kabul on August 17, 2021, as the Taliban moved quickly to restart the Afghan capital following their stunning takeover of Kabul and told government staff to return to work. Photo by WAKIL KOHSAR/AFP via Getty Images

Taliban fighters stand guard in Kabul on August 17, 2021, as the Taliban moved quickly to restart the Afghan capital following their stunning takeover of Kabul and told government staff to return to work. Photo by WAKIL KOHSAR/AFP via Getty Images
Listen Now

In Afghanistan, the Taliban is now responsible for running the country’s security and an economy where agriculture is a prime focus and a terrible drought has left a third of the population at risk of going hungry, according to the Red Cross. That was before the collapse of the Afghan government. As it stands now, the Taliban has to do business with someone, but who could it be, and how could that look?

To help answer those questions and more, Marketplace Morning Report’s David Brancaccio spoke with Ian Bremmer, the president and founder of Eurasia Group, a U.S.-based political risk consultancy. Below is an edited transcript of their conversation.

David Brancaccio: Who’s ready to do business with the Taliban led-Afghanistan? I don’t know, Beijing, maybe?

Ian Bremmer: Sure. The Chinese government will end up being the lead economic investor-slash-partner into the new Afghanistan. But, let’s keep in mind that the United States was providing the majority of the Afghan budget, and no one is going to make that up. I mean, the big story here is that the Taliban is not going to have the money to run the country.

Brancaccio: Iran to the west is complicated. It sees a big security threat here. But I suppose before all this, there were indications we’d like to trade.

Bremmer: Sure, I get it, the region, you’ll see, there’s Pakistan trade, there’s Iran trade. And again, the infrastructure investments, and perhaps some level of loans and support, at low interest coming from China will be the significant money that the Taliban end up with, but this is going to be an incredibly incompetently run government, they have nowhere near the economic policymaking capacity that the former Gandhi government had, or the Karzai government had, and they’re not going to have the financing.

Brancaccio: I mean, just to be clear, the World Bank had its Afghanistan reconstruction trust fund, that was about $12 billion for development. A relationship like that just goes away?

Bremmer: Just goes away. In fact, just to be clear, the U.S. government has had internal conversations in the last few days, making sure that as the Taliban takes over that they do not have access to all of the money that the former Afghan government did. So the economic squeeze is on. I mean, right now, the U.S. is talking about, if they don’t provide free access, and everyone to get to the airport, they’re gonna engage in airstrikes against these guys. We’re not talking about economic aid and development for the Taliban right now.

Brancaccio: We know a surge of Afghan refugees seeking asylum in other countries must be underway. One well-traveled route for those fleeing the country leads through Turkey. Turkey is a complicated place in Europe, and Turkey is going to end up with refugees on its hands.

Bremmer: That’s right. And Turkey is going to be again in a position of leverage, where they are asking for money from the European Union to ensure that their borders are closed, and they maintain and house all of these refugees. They’ve done quite a job on that front …  millions of refugees have been on the ground in Turkey, the majority of those leaving from Syria heading into Europe have ended up in Turkey, and a much smaller number have truly upset the apple cart politically in countries like Germany and France. So there will be an interest in the Europeans in working with Ankara, and this is frankly, I mean, there are very few countries around the world for whom Taliban fall into part of potentially a geopolitical plus – Erdogan in Turkey is actually one of them.

Brancaccio: I know you believe this ugly exit from Afghanistan hurts U.S. relationships with its allies. Why? Allies don’t appreciate the U.S. making Taliban-led Afghanistan someone else’s problem?

Bremmer: Allies don’t appreciate after 20 years of us fighting side by side with them, us making all of these decisions and taking them by ourselves. They expected America First under the Trump administration, they did not under the Biden administration. And I think both the the internal policy review to leave the announcements, how it was done, the absence of planning, the poor execution on the ground. I mean, all of that is largely on the United States individually, the allies aren’t a part of it. This is not multilateralism, and you know, the allies don’t want to be treated that way.

Brancaccio: I’ve got to ask you, there wasn’t an Ian Bremmer plan that would have brought about a much better – from the U.S. point of view – outcome in Afghanistan? It’s a terribly hard problem.

Bremmer: There was a plan to be honest with you, David. I’m all in favor of the withdrawal. That’s a policy decision, and we saw that President Biden made a speech yesterday, and it was very competent, explaining why the U.S. had to go. But how you do that on the ground, the absence of planning, the absence of coordination with the allies,  I mean, heck, the Chinese as you say, they don’t want a failed state in Afghanistan. Why didn’t we even talk to the Chinese about the possibility of them providing peacekeepers as the U.S. and allies were leaving, and maybe we can continue to engage in air support, for example, or some level of humanitarian aid? None of that was explored. I think the execution was a debacle. And with a group around Biden – I know this cabinet, they’ve been around for a long time, they’re experienced – I am stunned that they mishandled this so badly.