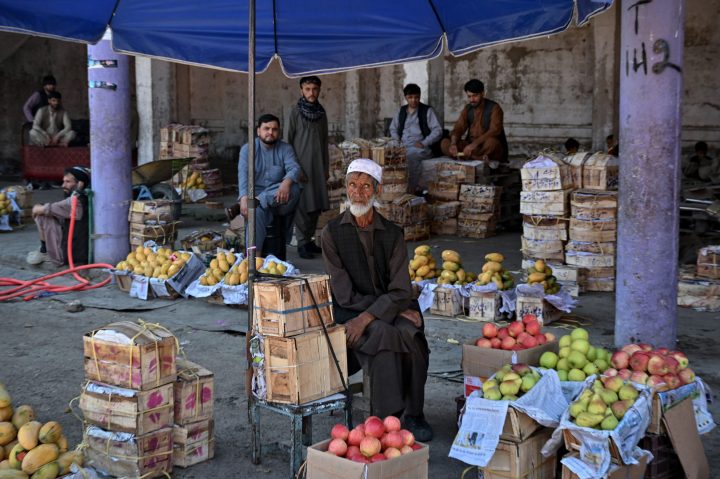 COPY
Poverty, acute hunger, and inflation have soared since the Taliban took power in Afghanistan in August 2021. The nation's former central bank governor says until the Taliban makes changes to policies the international community opposes, the economy will remain at a standstill. Lillian Suwanrumpha/AFP via Getty Images

Poverty, acute hunger, and inflation have soared since the Taliban took power in Afghanistan in August 2021. The nation's former central bank governor says until the Taliban makes changes to policies the international community opposes, the economy will remain at a standstill. Lillian Suwanrumpha/AFP via Getty Images
Listen Now

Widespread hunger, soaring inflation, rising fuel costs, and girls largely left out of the education system. Those have been some of the economic effects of a year of Taliban rule in Afghanistan.

The group swept back into power in August 2021 as a 20-year operation by U.S. forces and their allies ended in a disorganized and chaotic withdrawal.

The United Nations now estimates roughly half the population is suffering from acute hunger, while most international aid has been suspended. In June, the UN Security Council reported the Afghan economy had contracted by as much as 40% since the withdrawal and that the economic situation remains “dire.”

As the central bank governor, Ajmal Ahmady had been in charge of keeping Afghanistan’s economy on an even keel. But, like other officials, he fled the country when the Taliban took control last year. Just days later, we spoke to him about that decision to leave. Given his knowledge of that economy, we decided to call him back to ask him not just about the problems facing the country, but what he sees as possible solutions for getting it back on track.

On Monday, it was reported the U.S. and Taliban have ended talks, with no resolution, about whether to release some $7 billion in central bank assets frozen in the U.S. Another $2 billion is frozen by other governments. Ahmady started by explaining why there’s been so much focus on those assets, and what countries usually use them for. The following is an edited transcript of Victoria Craig’s conversation with Ahmady.

Ajmal Ahmady: International reserves for any country is the net sum of inflows and outflows out of that country. So for the past two decades, most of the inflows have come to Afghanistan via international aid. Those funds are used by central banks to pay for imports, but also to respond to shocks that hit the economy.

Victoria Craig: So, they’re mostly used basically as sort of a monetary policy tool. They’re not used for humanitarian aid, and the argument for them being released, they want to see that used to relieve the worsening humanitarian economic crisis in that country. But could they really be used in that way if they were released?

Ahmady: Correct: They are typically not utilized in that way. But in this particular case, that was a proposal floated, I think, by international partners to use them for humanitarian purposes. I think there’s a few parts of the story. So I think the first part is the fact that half of the reserves were allocated for the victims of Sept. 11 and half for humanitarian support in Afghanistan. So that’s, I think, one point of contention. And then the second is the Taliban would like to see it go back to the central bank and used for monetary and balance of payments issues, as we discussed. And I think the U.S. Treasury and other international partners want to create a humanitarian trust fund that would bypass the Taliban government.

Craig: A lot of people who are still living inside Afghanistan have told the BBC over the past year that they often feel like they’ve been abandoned by the international community. You mentioned that the Taliban wants control of those billions of dollars in reserves. But the question is: Does the Taliban have experience at the central bank to really handle the dispersion or the use of that money if it does ever come back to the country?

Ahmady: I think even more broadly than that, Victoria, the conversation has been a bit skewed. Taking a step back, I think one thing that we have to discuss is the fact that the release of reserves or the use of reserves is not going to solve all the problems that Afghanistan is facing, right? On an annual basis, Afghanistan ran a $7 billion trade deficit. And that was financed by international aid. And so having just one year of reserves, even if it were to be released, would really only help Afghanistan for one year. So the broader question is: How is the international community going to continue to support Afghanistan through a combination of reserves release and additional budgetary support as they were providing for the previous government?

Craig: What do you think that model can and should look like?

Ahmady: On the international community side, it’s coming to some sort of framework for how much they’re going to provide for Afghanistan moving forward. So the fear was last year that that will drop to zero. And so you can think of that spectrum between zero and seven. And what the international community has thus far decided to do was to provide $2 billion. That’s how much has been provided approximately over the past year, according to the World Bank. So they’re providing about 30% of what was previously provided. And what the international community are telling the Taliban is, “Well, we’d like to see reforms in a few different areas. We’d like to see women attend school. We’d like to see senior al-Qaida figures not in Kabul.” And that hasn’t played out according to anyone’s wishes, and so that’s why they’re holding their line and saying, “Well, we’re not going to provide more than this at this stage.”

Craig: The government needs money from somewhere. And it said that it held a meeting with a Chinese business delegation just a couple of months ago. I mean, is there a risk that if the West and its allies continue to isolate Afghanistan, that it could increasingly turn to China and its allies? And do you think that poses some kind of risk or consequence to the international community if it does?

Ahmady: No, I don’t think we’ve seen any indication that China wants to invest large sums of money into Afghanistan. So they’ve, I think, provided some level of humanitarian support and alluded to potential investments, but not on the continued and large scale that Afghanistan needs. I think that firepower is with the multilateral financial institutions, such as the World Bank and International Monetary Fund. And so I don’t see that as a threat. I think the likely situation is that the international community is going to continue to provide support at approximately this level, maybe a $2 billion to $3 billion level, which averts a humanitarian disaster but isn’t sufficient to allow Afghanistan’s economy to grow. And the reason we’re in this stalemate is because I think the Taliban have taken decisions that the international community doesn’t support, and it’s hard for the international community to justify providing more funds.

Craig: The Financial Times had a really interesting story last week about a pickup in coal mining and exporting, and that that’s something the Taliban has really seized on. But that is coming with a number of its own problems: exploiting children as workers and other people who are just desperate for some kind of income. And I guess the thing about that, too, is that the practice, while it’s lucrative when, you know, global commodity prices are high, it’s good for the country’s income, but does it risk sort of further moving the country and its economy backward? Because the last government had been working on a green transition.

Ahmady: I think the Taliban are doing what they need to. So there have been some reports and indications in some World Bank reports that they are collecting customs revenue, they are supporting exports and getting export revenue. And so there’s some additional source of revenue that they’re trying to generate. And they’ve been successful in some ways. But again, that probably adds an incremental $100 million to $200 million — in a best-case scenario, $300 million — to their revenue stream. And again, what we were talking about is a drop of $5 billion. So it helps them. It allows them to balance their fiscal accounts, but at a much lower level of economic activity. And that’s what the voices that you previously let me hear, that’s what those people are talking about. There’s a lower level of economic activity. And just to give you some numbers around this, you know, the GDP has contracted by 20% to 30%. That means that per capita income has dropped to around $360 per year, and that’s about $1 per day. That’s the reason why poverty rates have increased to more than 90% of the population. And so you’re now at a situation where you’re somewhat stabilizing, but at a much lower rate of GDP.

Craig: Very tellingly, there was a news outlet this week that quoted one Taliban fighter as saying, “We might be poor, we might be facing hardships, but the white flag of Islam will now fly high forever in Afghanistan.” I mean, is this just the new economic reality in the country? Or do you think the Taliban can get behind a plan that gets the international community on board and gets the economy in a more stable, long-lasting position?

Ahmady: It’s definitely possible, but there’s some decisions that have to be made. And so again, you know, I think two big turning points this year were one, the decision in March where they decided not to allow girls to attend school beyond a certain age. And more recently, when al-Qaida was founded in central Kabul. So I think those kinds of decisions erode the trust between the international community and the Taliban. And if there were ways to build that trust back by taking different policy decisions, then of course, greater amounts of humanitarian aid could be provided. But it doesn’t seem as though Taliban would like to take those alternative policy paths.

Craig: Is this a new normal?

Ahmady: Unfortunately, unless different decisions are taken, I think yes, we’re at a steady state at a lower level of economic activity.