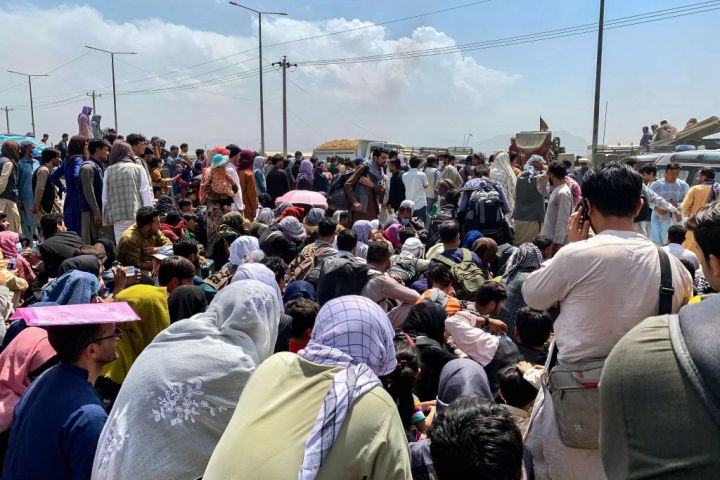 COPY
Afghans wait at a military airport in Kabul to board a U.S. aircraft to leave the country, days after the Taliban's takeover of Afghanistan. Wakil Kohsar/AFP via Getty Images

Afghans wait at a military airport in Kabul to board a U.S. aircraft to leave the country, days after the Taliban's takeover of Afghanistan. Wakil Kohsar/AFP via Getty Images
Listen Now

Hundreds of thousands of Afghans have fled or are trying to flee their homes as the Taliban takes control of Afghanistan. The effort to evacuate them – financing flights, coordinate visas, get them to the airport – is both massive and frantic. For Afghans who have helped the United States in Afghanistan, the danger is particularly imminent.

At least 300 Afghan interpreters and their families have been killed, even before the Taliban takeover, because of their association with the U.S., according to nonprofit No One Left Behind, which helps Afghans who’ve worked with the U.S secure visas and finance the resettlement process.

Marketplace’s Sabri Ben-Achour spoke with Matt Zeller, an Afghanistan war veteran who co-founded No One Left Behind. Below is an edited transcript of their conversation.

Sabri Ben-Achour: What’s the status of the evacuation effort right now? I mean, how many people have you gotten out, how many to go?

Matt Zeller: It’s complete chaos. We’re having reports of flights leaving Kabul half full – because we can’t get people through the gates at the airport. I know that they’re averaging something like … a flight every 30 minutes is departing. But again, when they’re not completely filled up, those are all seats that are just going unused.

Ben-Achour: Logistically speaking, I’m trying to understand the resources that it must take to move tens of thousands of people out. How do you do that? And how long would that take?

Zeller: This is going to be more difficult than the evacuation of Saigon. You know, in Vietnam, we had boats and an ocean to work with. Here, everybody has to fly out, and we’re trying to do it from an airport that has currently one active runway. So they have a major problem right now. It’s not just the United States that’s trying to fly all these people out, it’s the Brits, it’s the French, it’s the Canadians. There just isn’t enough airspace for people to be able to effectively and efficiently get out with the limited timeframe that we seem to have. And I know that it’s not popular, but there’s a bunch of airfields in Afghanistan that are currently sitting unused. Mazar-i-Sharif, Herat, Kandahar, Jalalabad and most importantly, Bagram are all just sitting there and could be retaken within hours if the president of the United States would just simply give the order.

Ben-Achour: How are you financing this evacuation effort? Who’s paying for it? And are there enough resources to do it?

Zeller: I mean, in terms of the airlift right now, it’s the American taxpayer. This is done being done almost exclusively by the U.S. military. There have been a couple now charter fights, they’ve been told have been able to actually fly into Afghanistan, pick people up and leave, that private civilian fleet is being paid for just buy about anybody you can imagine we’ve lost counted the number of efforts that are out there that are trying to raise charter flight money for a plane here, a plane there. Many of them are in the millions. And there is an army exclusively being led by mostly veterans, but it’s not just veterans, it’s the frontline civilians, the diplomats and aid workers who work with these people. We’re all just putting our lives on hold to do whatever we can.