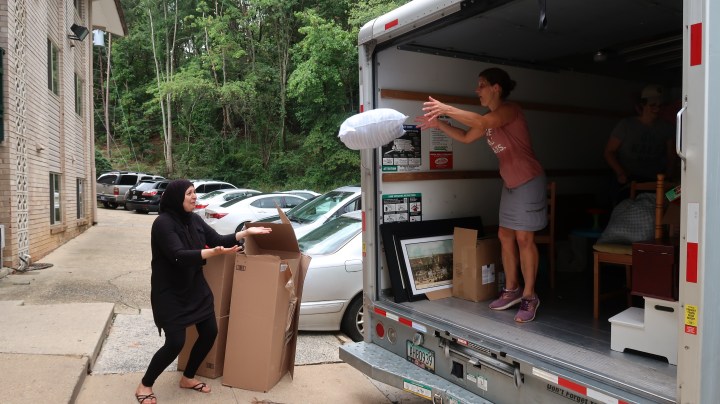 COPY
Laura Thompson Osuri, executive director of Homes Not Borders, tosses a pillow to volunteer Amal Abuldood as they prepare an apartment for an Afghan family soon to arrive on Special Immigrant Visas. Kimberly Adams

Laura Thompson Osuri, executive director of Homes Not Borders, tosses a pillow to volunteer Amal Abuldood as they prepare an apartment for an Afghan family soon to arrive on Special Immigrant Visas. Kimberly Adams
Listen Now

As the U.S. continues its evacuations of thousands of people from Taliban-controlled Afghanistan, aid groups stateside are prepping for an influx of families needing support and housing. This is especially the case for Afghans eligible for Special Immigrant Visas (SIV), often those who worked as translators, drivers or consultants for Americans during the two-decade war, along with their families.

Many of them are struggling to leave the country as the Taliban blocks access to the airport. The Biden administration authorized an extra $500 million for the SIV and other refugee programs this week, and the State Department said on Thursday there were 6,000 people at the Kabul airport ready to be airlifted out.

“Under normal circumstances, SIV’s would be processed through the U.S. Embassy in Kabul, get all of their paperwork in order, and then fly here through a commercial flight, right,” said Ruben Chandrasekar, executive director for the International Rescue Committee in Maryland, which works with the State Department to find housing for those who make it through the process. “Now, that process has had to change given the security situation in Afghanistan. So people are arriving, and they need to get many of their things processed here in the U.S.”

Many Afghans are going through those final steps at Fort Lee in Virginia, then looking for accommodations in the Washington, D.C. area, with the help of aid groups like the International Rescue Committee. Chandrasekar said they’ve worked with about 50 clients coming mostly from Fort Lee in the last two weeks, and his group is working on boosting staff by about 20% to prepare for even more families to come in.

Once families do arrive and make it through the SIV process, they need a place to stay. The State Department provides one-time payments of about $1,200 per person for SIVs “to pay for their initial resettlement costs. And that includes paying for their security deposit and helping to furnish their apartment,” Chandrasekar said.

While national and international groups like the International Rescue Committee and Lutheran Social Services, plus local groups like Virginia’s ECDC help locate housing, they often rely on other nonprofits to turn empty apartments into homes for recent arrivals.

Volunteers from the D.C.-area nonprofit Homes Not Borders have been scrambling to set up about six apartments per week with donated household goods — triple the pace of what they might normally do.

“We’ve seen a surge in the D.C. area,” said Laura Thompson Osuri, executive director of the group, who briefly paused while unloading a truck full of couches, tables, bedframes, mirrors, toys and other household goods. “This is an apartment for a family of six that came from Afghanistan … and we’re just dropping off some of the larger items for it now that we got from a donor.”

Osuri said the group will be back later to add the finishing touches, donated dishes, bed linens and artwork for the walls. She could barely pause to explain what she’s doing, as she pivoted from an interview to helping carry furniture to working with other volunteers on the best placement of a TV stand in the two-bedroom apartment in suburban Maryland.

For the family of six that will move into this apartment in just a few days, Osuri sees every item they put in place as one less item the family has to purchase out of its resettlement stipend. “So we are saving them that money … and then also providing a lot more [than the basics]. They get a full set of dishes, they get a coffee table then tables, lamps, TVs, all that kind of stuff.”

Osuri’s help on the recent setup is her sister, niece and nephew, along with Amal Abuldood and her husband, Atheer Abdullah, who came from Iraq on Special Immigrant Visas themselves a few years ago. Abdullah worked as a driver for Americans in Iraq. Abuldood said coming to a fully furnished apartment like the one she’s helping to set up made all the difference for her.

Since arriving, she’s been learning English and now has a certificate to teach preschool.

“Any people [from] Afghanistan, Africa — any people coming, I wish I help them for free,” she said, “because I know when I’m coming to America and many people help me, and I want to do same.”

Watching all the scenes of desperate people trying to flee Afghanistan is prompting lots of people to help just now, Osuri said. More people have been buying items off the group’s Amazon wishlist. She has dozens of volunteer applications waiting for review, and she’s seen a jump in cash donations.

“Which is great,” she said. “We can use it, you know, for our storage for trucks. We hopefully will buy a truck soon. So that’s great. We’re hoping to hire some more movers like Atheer … we’re going to get him on staff and pay him part-time and hopefully get another two or three guys to help out.”

With thousands of SIV families already in the U.S., and thousands more trying to get out of Afghanistan, Osuri is likely to need the help for some time to come.