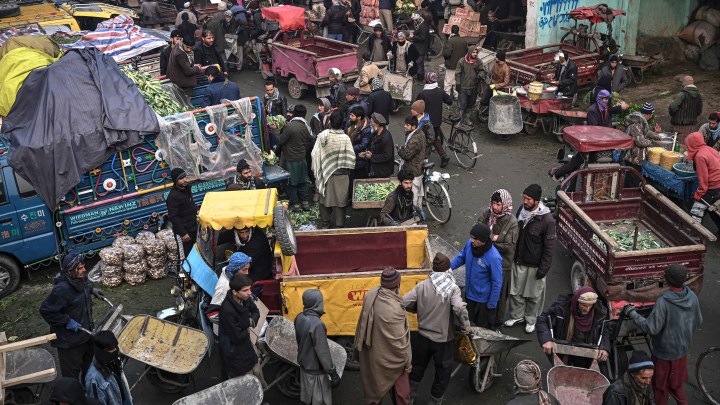 COPY
People shop at a vegetable market in Kabul in January. Since the Taliban takeover, an estimated 22.8 million Afghans are facing life-threatening food insecurity. Mohd Rasfan/AFP via Getty Images

People shop at a vegetable market in Kabul in January. Since the Taliban takeover, an estimated 22.8 million Afghans are facing life-threatening food insecurity. Mohd Rasfan/AFP via Getty Images
Listen Now

It has been six months since the Joe Biden administration withdrew U.S. troops from Afghanistan and the Taliban captured the capital city of Kabul. In that time, Afghanistan has fallen into a humanitarian and economic crisis. According to reports, more than 22 million people could face life-threatening food insecurity, and 9 million of them are close to being afflicted by famine. Millions of Afghans have gone months without a steady income.

Rising prices for food and fuel are making it hard for the Afghan people in part because of U.S. economic sanctions on the Taliban. The United States also froze about $9 billion in Afghan currency reserves, which has cut the country off from the global marketplace.

“Marketplace” host Kai Ryssdal spoke with Madiha Afzal, a fellow in the foreign policy program at the Brookings Institution, about the evolving situation in Afghanistan and the humanitarian and economic repercussions of the U.S. withdrawal. The following is an edited transcript of their conversation.

Kai Ryssdal: Before we get too far into the specifics of what’s going on, what is your broad sense of the Afghan economy in the six months since the United States left?

Madiha Afzal: The Afghan economy is essentially in free fall since the U.S. has left. It was an extremely aid-dependent economy. Seventy-five percent of the economy was dependent on aid. All of that aid has dried up, essentially. It is, at the same time, going through a massive humanitarian crisis — not only brought about by the fact that the aid has dried up, but because of a drought and the fact that there’s just not enough food for people to eat. And, on top of that, are huge sanctions that have been levied automatically on the country because of the Taliban takeover. And the final thing I’ll mention is that there are foreign reserves that the Afghan central bank holds in the U.S. and in [European Union] countries. And those, because of the Taliban takeover, have been frozen. What we see is a country that’s unable to implement monetary policy.

Ryssdal: Is there any relief coming from Afghanistan’s neighbors at all? Any regional assistance?

Afzal: There, there is, but you have, you know — the problem is, there are limits, right? So, in fact, Pakistan and Iran — Afghanistan’s two neighbors who have been in many ways most affected by the Taliban takeover — actually get some of the humanitarian relief that countries — including the U.S., including Japan — have been giving to Afghanistan because of the fact that there have been refugee flows from Afghanistan after the Taliban takeover into these countries. The [United Nations] has a huge appeal out, its largest appeal ever — $4.5 billion is what it’s asking countries to pledge to Afghanistan — but that hasn’t really been met with pledges. That humanitarian aid is limited. And that does not really counter the adverse effects of sanctions, of the freezing of reserves, and of, you know, in general, Western aid drying up after the U.S. withdrawal from Afghanistan.

Ryssdal: You know, one of the things you heard as the United States was pulling out was, “Oh, my goodness. Nobody could have predicted that the Afghan government was going to collapse as fast as it did and that the Taliban was going to take over as fast as it did.” And in point of fact, a lot of people actually predicted that. And I guess my last question to you, as a professional who studies this area, was this result of the economic chaos and the tragedy of famine and all of the horrible things that are happening over there — was this foreseeable?

Afzal: I think it was foreseeable. If the Taliban was going to take over, we should have known that our policy would have resulted exactly in this. You know, Afghanistan was already on the precipice of a major humanitarian disaster, and it essentially fell off that precipice. And so that fact, you know, should have been a given, and then we should have realized in some ways that the leverage that we spoke about, sanctions, aid, etc., was not really leverage, and that would have harmed — as it is now doing, as we are now seeing playing out — the Afghan people far more than hurting the Taliban itself.