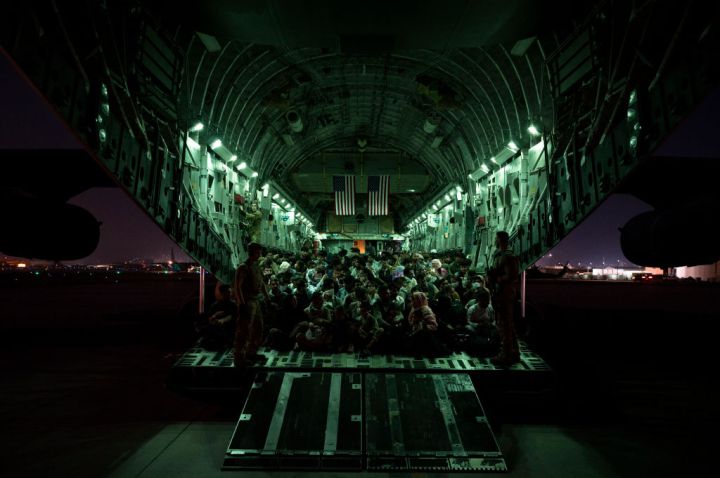 COPY
In this handout provided by the U.S. Air Force, an air crew assigned to the 816th Expeditionary Airlift Squadron assists evacuees aboard a C-17 Globemaster III aircraft in support of the Afghanistan evacuation at Hamid Karzai International Airport on August 21, 2021 in Kabul, Afghanistan. Taylor Crul/U.S. Air Force via Getty Images

In this handout provided by the U.S. Air Force, an air crew assigned to the 816th Expeditionary Airlift Squadron assists evacuees aboard a C-17 Globemaster III aircraft in support of the Afghanistan evacuation at Hamid Karzai International Airport on August 21, 2021 in Kabul, Afghanistan. Taylor Crul/U.S. Air Force via Getty Images
Listen Now

Afghans fleeing the Taliban are facing a harrowing journey just to get on a plane. But that is only the beginning of their journey. Afghans who are U.S. citizens, green card holders, or have special visas will go on to Kuwait and then to the United States. The rest are headed to Qatar, and from there, their journey is uncertain.

On Friday, Marketplace’s Sabri Ben-Achour spoke with Matt Zeller, an Afghanistan war veteran who co-founded No One Left Behind, a nonprofit that is helping Afghans who have worked with the U.S. secure visas and resettle. Zeller described the chaos of the evacuation effort. Below is an edited transcript of the second part of their conversation, with Zeller answering the question of what Afghan refugees would need when they arrive in the U.S.

Matt Zeller: When they resettle here, that’s where they’re actually going to need some really significant resources to come into play. There’s some limited government support. And then there’s organizations like the International Rescue Committee, Catholic Charities, HIAS, these organizations help these individuals get resettled here, and they can offer limited resources. But those are only going to go to the people who received the Special Immigration Visa. For everybody else who might come in under something called a P1 or P2 visa, they’re pretty much going to be on their own.

Which is why we’re saying to Americans, you can’t just think of these people as refugees. In a lot of cases, you’ve got to think of them as returning war veterans, and they’re going to need all the resources and support that I was given. And unfortunately, because they’re not technically legally veterans in our country, they’re going to be afforded none of it unless the American people step up and make sure that that happens. And the only way that that’s going to happen is through the private sector. There’s no government support for people, you know, in terms of dealing with the trauma of the combat that they’ve just experienced over the last, you know, 20 years.

Ben-Achour: It’s early days, obviously. But I still can’t help but wonder how these people will make new lives for themselves. I mean, the U.S. and Afghanistan are very different places. What opportunities are there for them here?

Zeller: When these people arrive here, you’re about to meet some of the most industrious and hardworking people on the planet. Let me tell you about my friend Ajmal. When Ajmal arrived the United States in early 2014, he came here with the clothes on his back, and he found himself in pretty bad circumstances. Nobody knew he was actually coming to the United States. And, he ended up actually homeless for a little bit.

Today, Ajmal is one of the largest real estate agents in the greater D.C. area, and he sells exclusively homes to Afghans who have made it to D.C. and found new lives for themselves. He is thriving. There are businesses that are popping up everywhere by these people. But what they need to get started is that helping hand. They need a first friend. These are a lot of people who are for the first time we’re going to live in a country where the predominant means of exchanging money is a credit card. They’ve never seen that. So the types of things that people could be doing are we need to be arranging community support. We need Americans to welcome these people not just into their homes, but hire them, put them to work in your companies.