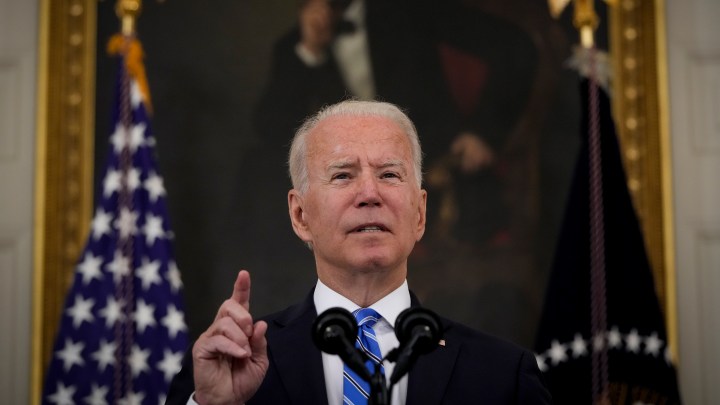 COPY
A memo released Wednesday tasks agencies with ensuring that disadvantaged communities receive much of the benefit of energy and environmental spending. Drew Angerer via Getty Images

A memo released Wednesday tasks agencies with ensuring that disadvantaged communities receive much of the benefit of energy and environmental spending. Drew Angerer via Getty Images
Listen Now

Two big themes of the first six months of the Joe Biden administration have been racial equity — the focus of one of the first executive orders the president signed — and environmental infrastructure, a big part of the infrastructure bill working its way through Congress.

On Wednesday, those themes came together. The White House released 13 pages of instructions to federal agencies on how to make sure that disadvantaged communities get at least 40% of the benefits from spending on energy and the environment.

To understand the kinds of problems this memo’s trying to tackle, you’ve got to refer back to the Jim Crow South, said Robert Bullard, Distinguished Professor of Urban Planning and Environmental Policy at Texas Southern University.

Today, underprivileged communities have to deal with poor environmental quality. And that’s not all, said Jonathan London, an associate professor of human ecology at the University of California, Davis.

“One of the key things in environmental justice is the idea of cumulative impacts,” he said.

That means people who are out of work or earn low incomes are more likely to deal with substandard housing, air pollution or lousy water quality.

“The most disadvantaged communities are those that are facing the highest concentration of multiple kinds of threats, and so it really requires this holistic approach,” London said.

So, the memo tasks 21 federal agencies and departments with helping “overburdened and underserved” communities.

But it’s only initial guidance, and the fact that this memo reflects the priorities of the Biden administration can also be a problem, according to David Pellow, a professor of environmental studies at UC Santa Barbara.

“Executive orders reflect the moment, who’s in power, who’s got the majority. It’s always, you know, subjected to being overturned and challenged,” Pellow said.

The good thing about the memo is it gets to the core of what environmental justice means, Bullard said.

“Infrastructure can improve health and quality of life. That’s how money should be spent,” he said.

The White House said it’ll be providing an interactive mapping tool that agencies can use to identify the areas of greatest need. That’s something environmental justice advocates have wanted for years.