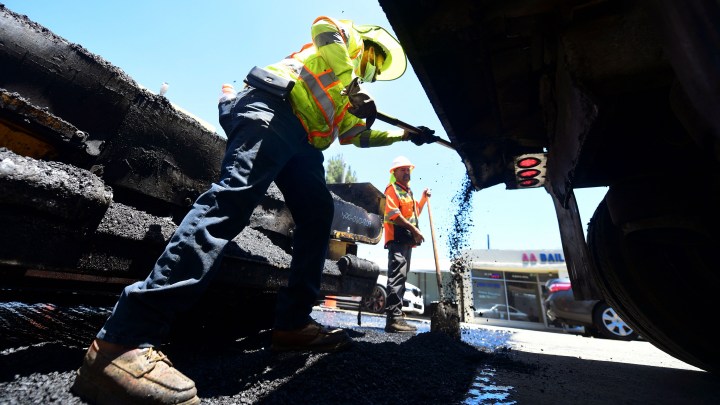 COPY
The Biden administration will be restoring a requirement for infrastructure projects to be evaluated for their climate impact. Above, a crew resurfaces a road in June in Alhambra, California. Frederic J. Brown/AFP via Getty Images

The Biden administration will be restoring a requirement for infrastructure projects to be evaluated for their climate impact. Above, a crew resurfaces a road in June in Alhambra, California. Frederic J. Brown/AFP via Getty Images
Listen Now

In the 1970s, the federal government started requiring major public and private infrastructure projects — new pipelines, highways, factories and so on — to be evaluated for potential environmental impacts.

Last year, the Trump administration loosened the requirements, including dropping a requirement that climate change be one of the impacts reviews considered.

The industry loved the changes, while environmentalists hated them. Now, the Biden administration has started the process of undoing some of those changes — including restoring the requirement that the evaluations consider climate impacts.

Before the Trump administration loosened the rules last year, it wasn’t enough to just look at the direct effects of, say, paving over a stretch of land to build a new highway.

You also had to consider the indirect effects, “like the additional traffic, the runoff from stormwater, the impact on air pollution,” said Kym Hunter, a senior attorney with the Southern Environmental Law Center. “And you’d have to look at the cumulative effects. So, how does this highway combine with the impacts of other highways to hurt things like air quality, water quality and to contribute to climate change?”

Though the Biden administration is now in the process of reinstating those requirements, doing so could get in the way of one of the administration’s other goals: upgrading the country’s infrastructure.

“It takes, on average, four and a half years for a major project to get permitted,” said Chad Whiteman at the U.S. Chamber of Commerce.

He said that kind of delay can end up meaning, “you’re leaving older infrastructure in place, which may or may not be as quite as resilient.”

The administration has these two big priorities — climate and infrastructure — and in a lot of ways they line up “to really invest in infrastructure in a way that hasn’t been done since Roosevelt, and to build up systems that make us more climate-resilient and climate-smart,” she said.

But, given the realities of the federal bureaucracy and how long environmental reviews tend to take, adding the climate change analysis back in “could have the effect of slowing down that agenda,” Vajjhala said.

Ultimately, she said, the devil will be in the details — and there are still a lot of details left to work out.