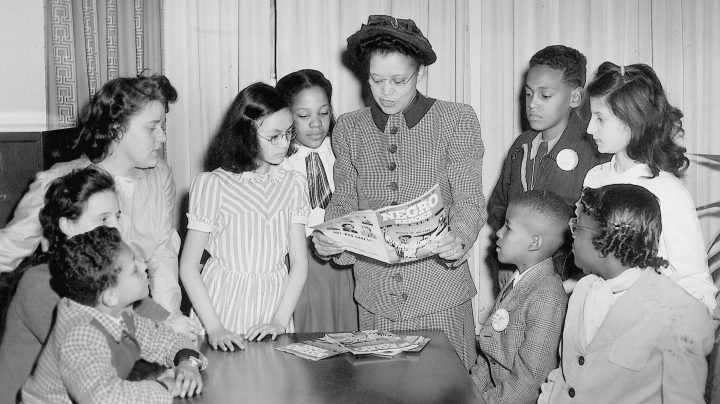 COPY
Sadie T. M. Alexander, the first African American to receive a Ph.D. in economics in the United States, reads a comic book to children in 1948. University Archives and Records Center, University of Pennsylvania.
Shelf Life

Sadie T. M. Alexander, the first African American to receive a Ph.D. in economics in the United States, reads a comic book to children in 1948. University Archives and Records Center, University of Pennsylvania.
Listen Now

One hundred years ago this month, a woman named Sadie T. Mossell (later known as Sadie Alexander) became the first African American to receive a doctoral degree in economics in the United States.

But despite her economics Ph.D. from the University of Pennsylvania, she could not find paid work as an economist. She later returned to school to pursue a law degree and went on to a long career as a civil rights attorney and activist.

“Economists assumed that after she became a lawyer, she had given up her interest in economics,” said Nina Banks, an associate professor of economics at Bucknell University and editor of a new book called “Democracy, Race, and Justice: The Speeches and Writings of Sadie T. M. Alexander.” “And so when I went to the archives at the University of Pennsylvania in 2003, I was really shocked to find that for all of her life, she had a sustained interest in economics [and] the economic status and condition of African Americans.”

After that, Banks spent years researching the archives of Sadie Alexander to uncover the economic ideas within her words.

“The book is my excavation of her economic thought and the return of it to the economics profession,” Banks said.

“Marketplace’s” Kimberly Adams spoke with Banks about her explanation of Alexander’s work. The following is an edited transcript of their conversation.

Kimberly Adams: If you’ll indulge me a bit, I was struck by two particular passages, because over the years, you can see through her speeches, how she’s grappling with an idea that’s still a topic of debate — sort of this balance of personal responsibility of Black people on an individual and community basis to change the situation versus the role and responsibility of government. You have a fragment of one of her speeches from the 1920s, where she talks about the poor mortality rates and literacy rates of Black people due to “a failure on our part to train our bodies and our minds.” Fast forward several decades to a speech she gave in 1963 called “New Tempos, New Concepts.” She talks about to push for change, we’re going to have to “do a lot more than change the self-image of Negroes, we’re going to have to restructure society.”

Nina Banks: Yes, you identified, I think, a really problematic speech, where she focused on, as you said, individual responsibility and group efforts, behavioral factors. But certainly, her thinking shifted, I think, as she experienced discrimination and witnessed more discrimination and racial oppression. And so by the 1960s, with the speech that you’ve read, she has really gone full circle. And so she’s looking at systemic structural barriers. And that speech, I think, is really interesting, because she talks about the need for a restructuring of our society, so that African Americans would be fully able to participate in our society, economically, politically, socially and so on. And we are still, as you said, grappling with that today.

“The test of our belief in the Bill of Rights is the extent to which these rights are enjoyed by the minority. The object of these restrictions on the government was to assure the common man the enjoyment of certain God-given rights, outlined in the first ten amendments to the Constitution. If their object is to protect the average man, then the acid test as to whether or not he is protected is found, not in the rights enjoyed by the majority, which are incidental, but in the rights enjoyed by the minority, which are essential.”

Adams: She wrote and spoke, of course, on the Black economic experience. Alexander also did a great deal of work and data mining and research on gender roles and women in the workforce, and illuminating so many of the same problems that we’re seeing now in the “she-cession” of the pandemic.

Banks: So, in her section on women in the political economy, what I find really interesting is that the group of women she was most concerned about were African American women who were domestic workers. Those are the women who were the most vulnerable to economic downturns, as you said, and so, absolutely, if we look at the recession today, we see that the domestic workers have been especially hurt — women who are in personal service. So, you’re absolutely right. She was prescient in many ways and this was one, also in terms of the acute vulnerability of African American workers.

“We must provide the hope and the certainty of productive employment to everyone, and especially to Negro young people. The basic purpose of this comprehensive design, this total process, is the development of the deprived, the neglected — the discriminated against — the minority — to its full potential. This is necessary not only to meet the ends of social justice and morality, to fulfill the guarantees of our constitution and laws, but because in this era of automation, when tens of thousands of unskilled and semi-skilled jobs are being eliminated, it becomes an economic imperative which is basic to our very existence as a free society.”

Adams: Another area in which she was pretty prescient in her writings was another debate we’re having today about one of the key themes in her speeches and writing being, as you put it, her understanding of the problems of income inequality on the macroeconomy. And you have a question posed at the beginning of the book, literally, in the first paragraph, that I’m wondering if you can try to answer, which is: How might our understanding of the economy be different today if Sadie Alexander had been allowed to work as an economist at the time? And to add to that, if even her economic contributions have been acknowledged before now?

Banks: Yeah, I think that that is a really important question. And I think that it’s a question that can only be answered by the context of the time. And the context of the time, 1920s into the 1960s, is that African American scholars were employed at segregated institutions. So my sense is that had Sadie Alexander had been able to find employment as an economist, her economic thought would probably not have influenced the overall thinking within the economics profession, because there is still a tendency on the part of economists to dismiss the critical thought of African American economists, even in a post-civil rights era, unfortunately. [But] it would have made a difference in the thinking, certainly of students who would have been influenced by her — students who would have gone to [historically Black college or university].