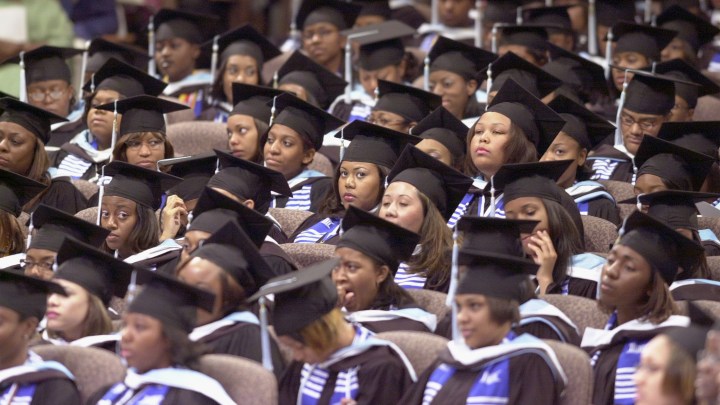 Fewer than .5% of Ph.D.s in economics were awarded to Black women in 2018. The Sadie Collective is trying to improve the situation by addressing the pipeline problems for Black women in economics and related fields. Marketplace host Kai Ryssdal spoke with the CEO and co-founder of the Sadie Collective, Anna Gifty Opoku-Agyeman. The following is an edited transcript of their conversation.

Kai Ryssdal: Tell me first of all, would you, a little bit about Dr. Sadie Alexander.

Anna Gifty Opoku-Agyeman: I am so happy you asked about her. She’s amazing. So Dr. Sadie Alexander is America’s first Black economist. She received her Ph.D. in economics in 1921 from the University of Pennsylvania. And she also received her JD from the University of Pennsylvania in 1927, when economics decided that they didn’t want to let her become an economist. And that’s how her legacy sort of lives on through the work that she did as a lawyer alongside her husband.

Ryssdal: There is, of course, a distressingly small number of Black economists at the upper levels, and actually also in the pipeline, too. So I guess what I need you to do right now is make the connection for me between improving that pipeline and getting more Black women into the field and the end result of economic policy. What happens when you reach your goal?

Opoku-Agyeman: Yeah, that’s a great question. So I literally just published an article, and it’s with the Economic Policy Institute about “Black women best,” which is an economic policy idea coined by Janelle Jones, who is one of the managing directors at the Groundwork [Collaborative]. And pretty much this idea says if we center the economy around Black women, everybody is alleviated in terms of outcomes. And so in order to do that, you actually have to have Black women in the room, right? And one thing that we’ve recently seen is, there’s no Black women in the Federal Reserve leadership. And so it’s really important that those individuals who are making important decisions at a high level are representative of the world that they’re hoping to make decisions for.

Ryssdal: And we should say Janet Yellen, former chair of the Fed and now the president of the American Economic Association, is, in word anyway, on your side. She’s come out about the importance of diversity in her field, your field.

Ryssdal: That’s funny, I call her Dr. Yellen, you know.

Opoku-Agyeman: Dr. Yellen is a huge supporter of the Sadie Collective, which I think is incredible. She was actually one of our keynote speakers at our conference this past year at the Urban Institute. And with regards to diversity and inclusion, I think Dr. Janet Yellen sort of is someone who personifies that a bit, right? She’s the first female chair of the Federal Reserve. And so it’s incredible that she’s now coming out and supporting Black economists, especially those in the pipeline, in this way.

Ryssdal: All right. So let’s get to nuts and bolts here, right, because as I’m sure you’ll recognize and admit, you have a heavy lift here, right? There’s a lot of work to be done to get where you want to go. You recently published an open letter to economists and I suppose everybody with a list of things you and your group want to see happen. What are the top, like, three things that will be most tangible to get Black women in economics and related fields in positions where they can influence policy?

Opoku-Agyeman: So I think that this idea of putting it on one organization to fix a pipeline problem, or even a couple organizations, you know, that’s not the way we should be looking at things. With regards to the open letter, I’m so happy that you mentioned it. So there’s a couple things that we definitely want to see happen. First and foremost, folks need to be citing more Black economists. And then I think the next ask is specifically for the Federal Reserve System. So the Federal Reserve System recently has been sort of in the news for structural racism at the leadership level. I would argue it’s at every single level within the Fed. And so one thing that we’ve asked in our letter is that Federal Reserve banks across the system must commit to recruiting from at least five [historically Black colleges and universities] a year, including the Sadie Collective as well, which is now home to a lot of Black women in economics. And so this is really to ensure that this idea of, I can’t find Black talent, is squashed. And a lot of people say that when an HBCU might be in their backyard. And I think the last ask that I will say that’s really important, is also thinking critically about honoring Dr. Sadie T.M. Alexander and the birth of Black economists within this profession. But in order to do that, there needs to be some institutional support. And so we have actually called out the American Economic Association specifically to take on this effort.

Ryssdal: When we get to where we need to be and fulfilling the goals of the Sadie Collective, what does that look like for Black women economists? Describe that.

Opoku-Agyeman: What that looks like is if a Black woman economist is contributing to work, it’s not a shock. And so it’s important for us to think critically about, how do we loop in institutions to set the change, set the standard, so that we’re able to see Black folks in this specific field normalized and celebrated in a way that allows the next generation to follow closely behind.