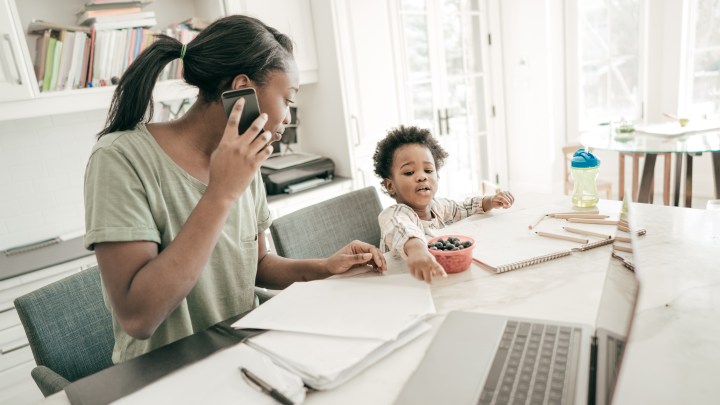 COPY
Child care needs are part of the reason the current recession has had a greater effect on women than on men. Kate Sept/Getty Images
COVID-19

Child care needs are part of the reason the current recession has had a greater effect on women than on men. Kate Sept/Getty Images
Listen Now

In the past few recessions, it was men who were disproportionately affected when jobs like manufacturing and construction took a blow. But COVID-19 has affected industries that tend to hire women. Add to that child care responsibilities, and you have what some are calling a “she-cession.”

At the beginning of the year, women’s unemployment rate was lower than men’s. Then the pandemic hit, and the tables have turned. In July, the unemployment rate for women was almost a percentage point higher. And it’s more pronounced for Black and Latina women.

“Many of the sectors that have seen significant disruption, like leisure and hospitality, restaurants — those are workforces that are often disproportionately female,” said Jocelyn Frye, a senior fellow at the Center for American Progress.

And with many schools announcing they are going remote and widespread day care closures, things are getting even more complicated. Using data from July, the Census Bureau reports women are nearly three times more likely than men to not be working due to COVID-19-related child care needs.

“I think that is a cultural and social norm, that women tend to take on the majority of care responsibilities in a household,” said Valerie Rawlston Wilson, director of the Economic Policy Institute’s Program on Race, Ethnicity, and the Economy. “And of course if you live in a household as a single woman with children, then you are the care provider.”

Experts are concerned about what effect this will have on the gender wage gap long-term.

“A big driver of the gender wage gap is the fact that women are more likely to take some time out of the workplace for caregiving,” said Emily Martin, vice president for education and workplace justice at the National Women’s Law Center. “And really what we’re seeing in the current recession, is that phenomenon turned up to … 11.”

She said now more than ever is the time for businesses and the government to look into better work-life policies — especially for women.