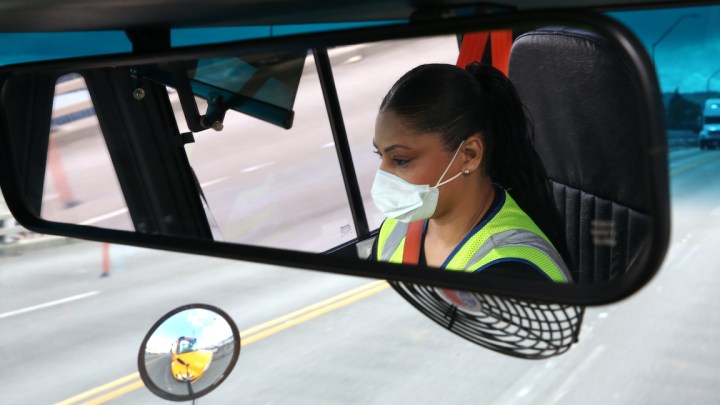 COPY
The job market has changed, as well as workers' situations. For people who used to be bus drivers, for instance, there may not be jobs to go back to. Karen Ducey/Getty Images

The job market has changed, as well as workers' situations. For people who used to be bus drivers, for instance, there may not be jobs to go back to. Karen Ducey/Getty Images
Listen Now

Because of this pandemic, there are a lot of people who no longer have jobs and are not actively looking for jobs. Those people were in a different situation pre-pandemic. They had jobs or were actively trying to find jobs.

Since February 2020, 3.5 million people have entirely dropped out of the labor force, at least temporarily. Which means that the labor force participation rate (the number of people working or looking for work, divided by the entire civilian noninstitutional population 16 and older) has fallen to a level not seen since the late 1970s. The LFPR was 61.6% in May, actually down a tad from April, and it hasn’t budged much since June of last year, right after the pandemic recovery started.

So what gives? What’s keeping 3.5 million Americans who were working and earning, or at least trying to, out of the workforce?

We can point to a few things that clearly have kept a lot of people from reentering the workforce so far. Child care obligations. Fear of getting COVID-19 with less than half the population fully vaccinated.

And that’s just to start with. The economy itself isn’t ready to take a lot of workers back, said Julia Friedlander at the Atlantic Council. “You don’t see a broad, sweeping return of the services sector. I mean, depends where you go in the country. I just drove across it — some states have everything open, some don’t.”

And for people who used to be, say, janitors or bus drivers, there may not be jobs to go back to.

“Having to do with transport, having to do with maintaining large office buildings, like anything that was sort of a given before the pandemic, that’s now still in question,” Friedlander said.

Most K-12 schools will be back in session come September, but Jasmine Tucker at the National Women’s Law Center said some of the 1.5 million moms who’ve left the workforce will want to wait until it’s safe to send their toddlers and preschoolers out of the house again.

Plus, there’s a lot of pent-up churn in the job market already, according to Scott Hamilton at human resources consultancy Gallagher. That’s made it harder for employers to get workers to stay in jobs.

“You have employees that are changing jobs based on post-pandemic lifestyle needs. You have pent-up turnover where employees have worked through the pandemic in their roles but are finding other opportunities in other businesses,” he said.

Many employers are putting more money on the table to draw people back to work.

“There’s a certain element of wage increases that will obviously result in increased labor-market participation. But it seems like employers are looking at other ways to get people in the door,” Hamilton said.

Like offering flexible hours, remote-work options, child- and elder-care benefits — which were barely part of the equation before the pandemic.