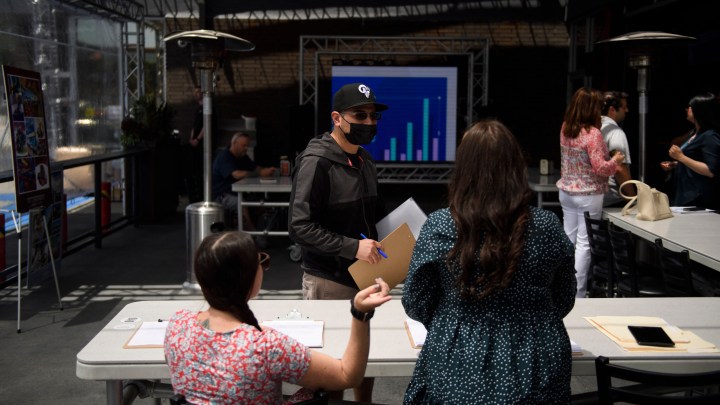 The economy added almost a million jobs in July. But one thing is kind of odd: The labor force participation rate — the proportion of people who are either working or looking for work — stayed pretty much the same.

It’s at 61.7%, in the narrow range where it’s been stuck since June of last year. And it’s still 1.6% lower than it was at the start of the pandemic.

The labor force participation rate reflects a bit of a push and pull in the job market: How many people are in jobs or actively hunting versus people who’ve given up on the job hunt or retired, for example.

“So, on aggregate, the labor force participation rate has stayed steady,” said Kate Bahn, director of labor market policy at the Washington Center for Equitable Growth. “But that is made up of, in one direction, unemployed workers going back to work — that’s where we see this big job growth. But on the other hand, we’re also seeing folks who are dropping out of the labor force.”

Here’s an example of how that plays out: Tiffany Nguyen is 28 and has five kids, including a 1-month-old baby. She lost her job as a host in an Italian restaurant in Washington, D.C., at the start of the pandemic.

Then, “towards the end of 2020, they reopened back up. And then I was pregnant at that time, so I couldn’t go back to work due to I didn’t want to get sick,” she said.

So, she left the labor force. But now, Nguyen is vaccinated and ready to go back to work, as soon as her kids go back to school.

“From there, I could just work my normal shift hours … so that I don’t have to stay home constantly,” she said.

Because lots of working parents are in that situation, the labor participation rate is likely to go up, said Odeta Kushi, deputy chief economist at First American Financial Corp.

“We’ll see those people come back to work, especially as they’re less concerned about the pandemic. But some of it is permanent, as a lot of these older workers decided to retire,” Kushi said.

A cautionary note: These numbers were gathered before the spike in COVID-19 cases due to the spread of the delta variant, which has workers like Nguyen worried.

“I don’t want to go back to work and then end up getting sick,” she said. “It just makes me double-guess like, ‘Am I making a good decision? Or should I just stay home with the kids?'”

If Nguyen decides working is not safe for her or her family, she’s ready to stay out of the labor force a bit longer.