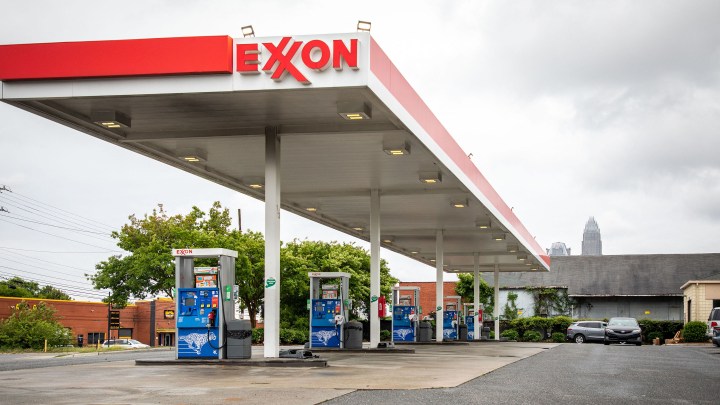 David Brancaccio, Meredith Garretson, and Erika Soderstrom May 27, 2021
Heard on:

COPY
The activist hedge fund Engine No. 1 yesterday won enough support from other shareholders to get at least two seats on the board of the oil company Exxon Mobil. Logan Cyrus/AFP via Getty Images

David Brancaccio, Meredith Garretson, and Erika Soderstrom May 27, 2021
Heard on:

The activist hedge fund Engine No. 1 yesterday won enough support from other shareholders to get at least two seats on the board of the oil company Exxon Mobil. Logan Cyrus/AFP via Getty Images
Listen Now

A tiny hedge fund worried about climate change has shaken up the world of boardrooms. The activist hedge fund Engine No. 1 yesterday won enough support from other shareholders to get at least two seats on the board of the oil company Exxon Mobil. The votes are still being counted and there could be more.

The investors didn’t think Exxon had done enough to embrace cleaner energy. These types of challenges from activist investors tend not to get far.

Erik Gordon, a professor at the University of Michigan’s Ross School of Business who closely follows shareholder activism, spoke with “Marketplace Morning Report” host David Brancaccio about this. The following is an edited transcript of their conversation.

Erik Gordon: This is a real sea change. This is the first time the climate change people have been able to challenge and succeed against a big oil company.

Brancaccio: And the big oil company here did not want this change. And the challengers here were not really huge shareholders. It’s not like they own 51% of Exxon Mobil.

Gordon: You know, in the world of investing, it was an ant. This Engine No. 1, the actual name of the challenger, is like a tiny ant, you can barely see them. But they put together and executed a masterful plan. And they won.

Brancaccio: In large part, you could argue on the power of ideas, the pressing challenge of climate change.

Gordon: Yeah, it was the triumph of an idea whose time has, perhaps, more than come against entrenched power. I mean, what is more entrenched and powerful than Exxon?

Brancaccio: Now, boardrooms across the country are probably reading and listening with great attentiveness.

Gordon: They sure are. Because, one, it’s a big surprise. And, two, directors like to keep their jobs. They’re difficult jobs, they do a lot of work, but they pay a lot of money. The Exxon directors make between $200,000 and $675,000 a year. These are jobs they want to keep. And it’s embarrassing amongst your peers to lose your job as a director.

Brancaccio: And it moves the needle on the fight against carbon gases in the atmosphere that contribute to climate change, you think?