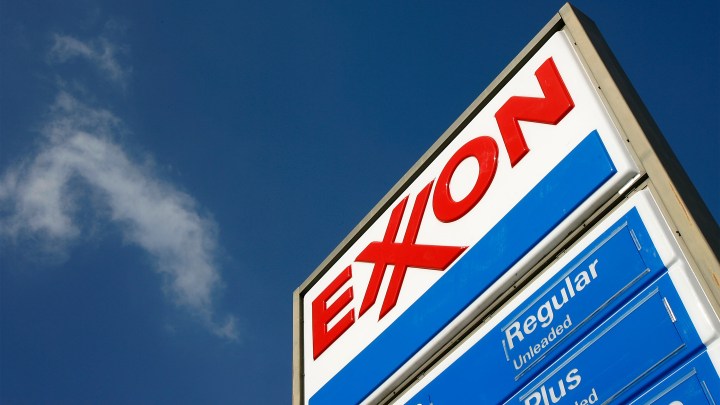 COPY
The oil and gas giant is on trial for committing fraud over climate change risk. Above, an Exxon gas station in Burbank, California. David McNew/Getty Images

The oil and gas giant is on trial for committing fraud over climate change risk. Above, an Exxon gas station in Burbank, California. David McNew/Getty Images
Listen Now

A case against oil and gas titan Exxon Mobil goes to trial Tuesday before the state Supreme Court of New York. The main accusation by the New York attorney general’s office is that the company committed investor fraud by using two sets of books on climate change risk.

In public comments, the argument alleges, Exxon Mobil assumed significant carbon regulations in the future, which would impose stiff costs on fossil fuel production and investment. In private business decisions, however, the company’s actions were altogether different, the plaintiff argues.

“The internal reports effectively say, ‘Well, we don’t anticipate much in the way of additional costs based on climate risk regulation,'” David Shapiro, fraud risk and financial crimes specialist at the John Jay College of Criminal Justice, said.

Exxon Mobil calls the case against it a “baseless theory” and that its two separate cost assumptions for future climate change regulations represented apples and oranges. One assumption was meant for specific energy projects and the other was for projected climate regulations and taxes in the future.

“One, you’ve got actual hard costs that you can actually consider,” said Mark Stoeckle, CEO of Adams Funds, which holds Exxon stock. “The second is a bunch of assumptions you have to make many years down the road. I’m not sure that’s fraud. Sounds like good business judgment.”

Analysts following Exxon Mobil stock aren’t even writing about this case, Stoeckle said, suggesting that were the company to lose this case, the financial penalties could be negligible.

However, state attorneys general and others bringing climate and energy litigation see far more riding on this case.

“I think it’s part of a much broader effort to figure out a way to address climate change when there’s a perception that the federal government isn’t moving fast enough,” said Brandon Barnes, energy litigation analyst at Bloomberg Intelligence.

Dramatic moments in the case could center on internal company emails. A pretrial investigation found Rex Tillerson, who served as CEO and chairman of Exxon Mobil during the period in this case, used two email addresses for work, one under his actual name and another under the alias “Wayne Tracker.” The company said the second email was created for “secure” communications.

Emails from the Wayne Tracker account were deleted for several months in 2014, the New York attorney general alleges.

“The state has accused Exxon of destroying evidence, namely Tillerson’s emails,” Patrick Parenteau at Vermont Law School said, “so he’s going to be called to the stand to account for these emails. There’s likely to be more information out in this trial, shedding light on exactly what’s going on inside the company.”