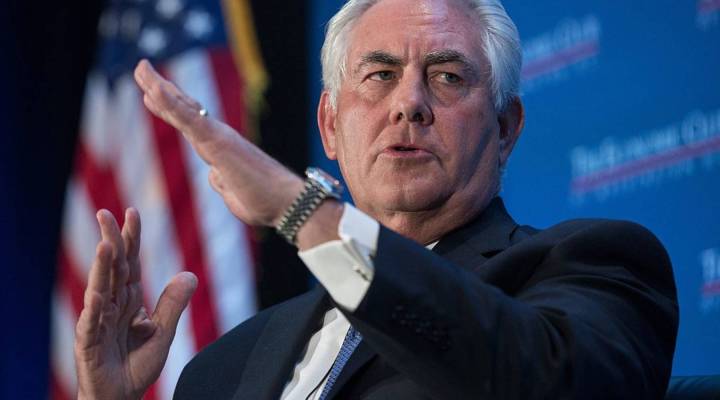 COPY
Exxon Mobil chairman and CEO Rex Tillerson gestures while speaking at a discussion organized by the Economic Club of Washington on the energy innovations that have led to a new era of energy abundance for North America in Washington, DC on March 12, 2015.    NICHOLAS KAMM/AFP/Getty Images

Exxon Mobil chairman and CEO Rex Tillerson gestures while speaking at a discussion organized by the Economic Club of Washington on the energy innovations that have led to a new era of energy abundance for North America in Washington, DC on March 12, 2015.    NICHOLAS KAMM/AFP/Getty Images
Listen Now

Former Exxon Mobil CEO Rex Tillerson only divested from his company last week. The prospect of an oil executive leading international diplomatic ties has caused a lot of concern for those worried about climate change, a major international issue. It’s still unclear what impact his appointment would have on policies.

Much of that stems from the lingering uncertainties over what the Trump Administration’s policies will be, said Kevin Book, managing director of Clearview Energy Partners.

“The Trump Administration’s official climate policy hasn’t been introduced in any form, so as analysts of what investors should expect, we have little to go on,” Book said.

In his rhetoric, the President-elect has somewhat walked back a 2012 Tweet, in which he questioned global warming, saying it was a Chinese ploy to undermine American manufacturing. In his appointments, Trump has picked many people widely perceived to be climate skeptics. Tillerson’s views, though, appear to stray from outright denial of human impacts on climate change. The prospective Secretary of State has said he understands carbon emissions lead to global warming. He believes technological advances could provide an answer for those emissions.

“If we assume that the Trump Administration is full of climate deniers, then it would be safe to say that Rex Tillerson looks like he has a more nuanced, more accommodative view of global climate policy,” Book said.

Part of that comes from his role as an oil executive in a worldwide industry, the operation of which necessitates some form of diplomacy. Book said Tillerson is more likely to act in accordance with other nations on issues such as the Paris Climate Agreement, a global pact to reduce carbon emissions. Even so, that tendency wouldn’t mean abandoning oil production.

“You can’t expect somebody who sells oil to be against selling oil, nor for that matter could you expect a Secretary of State who represents an oil-based economy to be against oil,” Book said. “It’s just not a realistic expectation.”

Under Tillerson’s watch, Exxon Mobil has signaled openness to a carbon price, such as a tax on emissions. The company also eventually backed the Paris Accords.

“How that would translate into what a Secretary of State Tillerson might do with any kind of a climate policy or American engagement in the Paris Accords is really unclear at this point, which is why these confirmation hearings, hopefully really shed some significant light on that,” said Barry Rabe, a non-resident senior fellow at the Brookings Institution.

Rabe said he’s particularly interested to see whether the confirmation hearings bring up discussions of a national carbon price, though he said it’s unlikely the Trump Administration would institute one.

“What the Tillerson case does, in effect, is just to begin to test the waters,” he said.