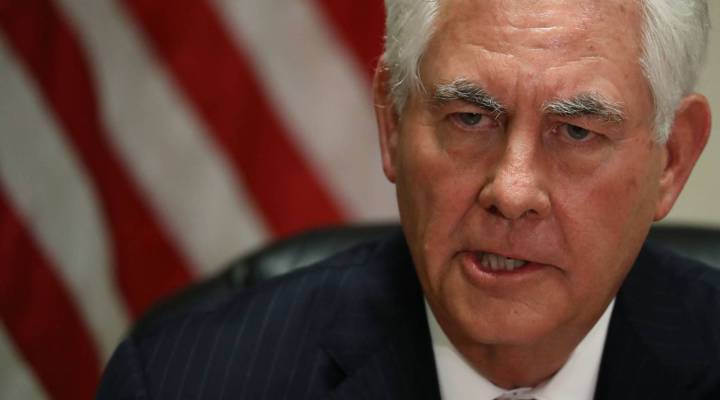 COPY
Rex Tillerson worked for decades at Exxon Mobil, including as CEO, before becoming secretary of state in the Trump's administration. Joe Raedle/Getty Images

Rex Tillerson worked for decades at Exxon Mobil, including as CEO, before becoming secretary of state in the Trump's administration. Joe Raedle/Getty Images
Listen Now

Secretary of State Rex Tillerson arrived in Moscow earlier today. This marks his first official visit to Russia as the U.S. secretary of state, but it’s a trip he made several times previously as CEO of ExxonMobil. How is Tillerson really doing in his transition from businessman to politician? To get an answer, host Kai Ryssdal spoke to Steve Coll, a New Yorker writer and dean of the Graduate School of Journalism at Columbia University. His book, Private Empire: ExxonMobil and American Power, profiles the corporation and its role in recent history. Below is an edited transcript of their conversation.

Kai Ryssdal: What was Rex Tillerson like as the CEO of Exxon?

Steve Coll: Well, he was a lifetime employee of the corporation; rose from entry-level out of college all the way to the top; served as CEO for 10 years. He was sort of a steady hand at a corporation that has always bred its own leaders. A pretty good communicator. But his job was mostly to fly around the world in Gulfstream jets and negotiate oil deals in private with world leaders. And that’s where he spent most of his time as chief executive before coming to Washington as secretary of state.

Ryssdal: And now he’s flying on government planes negotiating in public with world leaders. A different thing, and I guess the question is: Does this skill set transfer?

Coll: Yes, some of it does. Obviously, some diplomacy involves private negotiations, sometimes with authoritarian leaders and complex subjects, and he’s certainly well schooled for that part of the job. But diplomacy is different, as you say, because it’s really three-dimensional chess. You have to be speaking to publics and the press, really to shape the story of diplomacy and American interests in a way that makes those private talks easier to conclude.

Ryssdal: Do you think he’s internalized that, yet? I ask because just the most recent example of his statements on Syria have been inconsistent over the past five to seven days or so.

Coll: Now they have been inconsistent. At least he’s been talking, so that’s also an evolution. When he first came in, he really remained quite notably silent. He took one reporter with him on a trip to Northeast Asia. And he told her, ‘Well, I’ve only been on the job six weeks. Give me some time.’ OK, seems fair enough. Now, he’s been on the job close to more like two months, and he’s started to do the things that secretaries do. He went on television for the first time. But as you point out, as he has stepped out onto the stage, he has discovered that diplomats in complex crises like the one in Syria have to be very precise about what they say. And what he has said has been a little bit inconsistent internally. But it also seems to reflect a little bit of disarray in the Trump cabinet about exactly what the new Trump administration policy towards Syria is about after these cruise missile strikes.

Coll: Well, we’ll see what it means. I think you would expect that it would mean discipline of messaging and policy formulation. I don’t really see that in the Trump National Security Cabinet so far. The world isn’t as tractable as it might seem when you’re outside of office. And trying to move a government like Russia’s to change its decadeslong relationship with Syria, for example, that’s not an easy transaction to pull off. I fear that there’s some typical learning of a new administration about how hard the world is to bend to your will, even when you’re the most powerful military in the world.

Ryssdal: He spent decades, anyway, working for Exxon shareholders. He now works for the American public, an arguably more complicated group of people. How does that, do you suppose, play as he tries to find his way?

Coll: Well, when you’re working on behalf of shareholders, you’re sort of bound by law to serve their interests first. And that means when you’re doing business in a dictatorship like Russia or a dictatorship in Africa, it may not be in your shareholders’ interests to speak your mind about what a lousy government this is, and how badly it’s suppressing its own people. But when you’re representing the United States, well now you have to manage the uncomfortable combination of hard realist negotiations with somebody like Putin with speaking out. It’s a new mandate for him, because it’s really quite different from what he was meant to represent when he represented ExxonMobil’s shareholders.

Correction (April 12, 2017): A previous version of this story misspelled ExxonMobil. The text has been corrected.