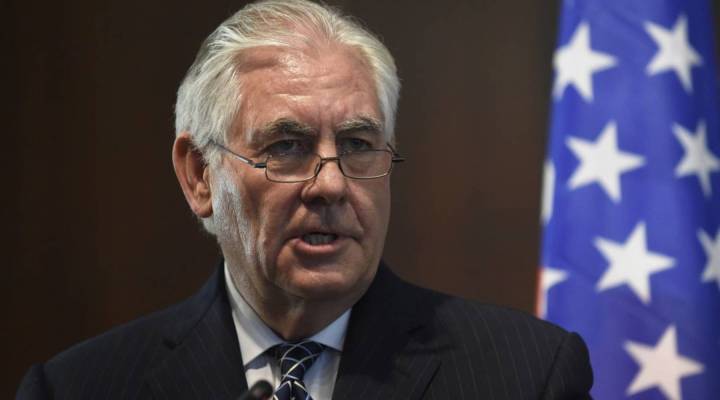 A White House official said Trump wanted to have a new team in place ahead of upcoming talks with North Korea and various trade talks. The official spoke on condition of anonymity because the official was not authorized to speak publicly.

There had been longstanding rumors throughout most of Tillerson’s tenure of friction between Trump and his secretary of state, a former Exxon Mobile Corp. CEO.

“The relationship has not been functional for a while. The fact that Trump was going to accept a direct meeting with [North Korean President] Kim Jong Un without his secretary of state knowing about it is unprecedented — even in the context of this administration,” Ian Bremmer, the founder of Eurasia Group, told Marketplace in an interview. “Add to that completely opposite stands in responding to the Russians growing over the course of the past month, it was getting harder for the relationship to work.”

In October, NBC news reported that Tillerson called the president a “moron,” something Tillerson never actually denied. Tillerson continued to insist his relationship with the president was solid and brushed off rumors of strain between them.

Tillerson had just returned from a shortened trip to Africa hours before Trump’s announcement. Trump offered no explanation for the change.

This shake-up may have consequences for foreign policy. According to Bremmer, while there was poor morale at the state department, Tillerson brought some good qualities with him.

“He is actually very sensible and actually has a lot of relationships with key world leaders, and has been a moderating force in key areas of confrontation,” Bremmer said. “Pompeo, much more ideological and hawkish, specifically on the Iran deal and on North Korea.”

Tillerson was slated to retire from Exxon in March 2017 at age 65 under the company’s mandatory retirement policy. Paid $27.3 million last year, Tillerson has accumulated roughly $160 million in Exxon stock along with $149 million of unvested stock options, according a proxy statement the company filed with the Securities and Exchange Commission.