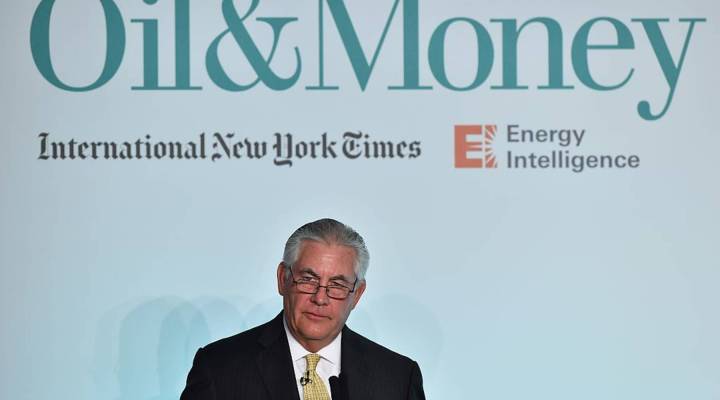 COPY
Chairman and CEO of US oil and gas corporation ExxonMobil, Rex Tillerson, speaks during the 2015 Oil and Money conference in central London on October 7, 2015.  BEN STANSALL/AFP/Getty Images

Chairman and CEO of US oil and gas corporation ExxonMobil, Rex Tillerson, speaks during the 2015 Oil and Money conference in central London on October 7, 2015.  BEN STANSALL/AFP/Getty Images
Listen Now

Secretary of State Nominee Rex Tillerson will face tough questions as he appears before the Senate later this month during his confirmation hearings. The former ExxonMobil head has cut a deal to cash out of the two million shares he’s owed after more than 40 years with the company, and his retirement package – worth an estimated $182 million dollars – will go into an independently managed trust. But it’s unclear whether this agreement will satisfy the Senate.

ExxonMobile’s plan called for Tillerson to get a chunk of his stock shares every year for a decade. But Tillerson’s cabinet nomination called for some sort of deal, since he could end up addressing climate change, or sanction Russia – work that could influence the value of Exxon stock.

“This is an odd one. Typically CEOs don’t retire to become Secretary of State,” University of Delaware professor Charles Elson said.

In the agreement being proposed, Exxon would place the shares’ value in a trust to be distributed over the next decade. Ultimately, Tillerson would forfeit about $7 million if confirmed.

Richard Painter, a former ethics lawyer for George W. Bush, said this divestment follows the executive branch conflict of interest playbook. “Most people are willing to invest only in conflict-free assets. Municipal bonds, U.S. Treasury securities, mutual funds. There are a wide range of options.”

We don’t know exactly how Tillerson’s money will be invested. But Painter said his case is easier than other Trump nominees who own private assets that are harder to sell than Exxon Mobil stock. The question, said Painter, is whether Donald Trump will follow the lead of his own Cabinet nominee.