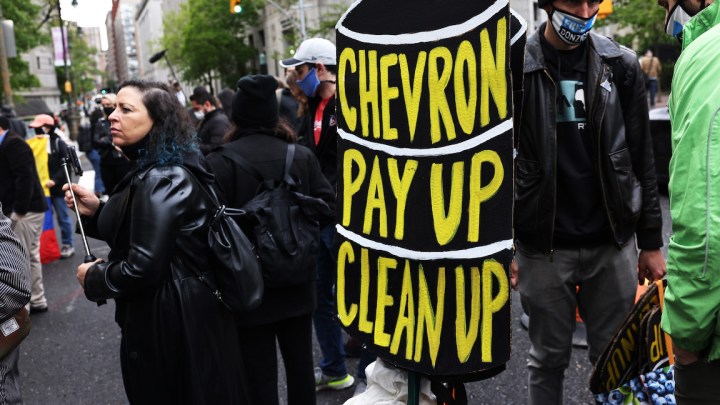 COPY
Climate activists are advancing in the U.S. But to achieve net zero carbon emissions by 2050, big changes will be required in an energy-hungry world. Michael M. Santiago/Getty Images

Climate activists are advancing in the U.S. But to achieve net zero carbon emissions by 2050, big changes will be required in an energy-hungry world. Michael M. Santiago/Getty Images
Listen Now

For the big multinational oil companies, Wednesday’s events may turn out to be a tipping point — for them, and for the climate.

Activist shareholders elected new members to the Exxon Mobil and Chevron boards, members who will argue for big changes in carbon-emissions targets. And in the Netherlands, a court ruled that Royal Dutch Shell bears climate responsibility and must cut its emissions. That’s a first.

But for all of those precedents, the big question is about the scale of their effects: Will what happened in the courtroom and the boardroom lead to changes that matter to the planet?

For big oil companies with giant climate footprints, these events are kind of a push and pull.

That’s how environmental lawyer Maggie Peloso at Vinson & Elkins sees it. “The litigation is really using the law as a push,” she said.

That is, the ruling against Shell may prompt other oil majors to cut their emissions.

“And the shareholder piece of it is trying to use shareholder preferences on climate as a pull. So you try to get people to go beyond the law and do more than what the law would require,” Peloso said.

Peloso expects the new board members, who were voted in by big investors, including BlackRock, to push for strategic changes.

But those changes have to be sizable, according to the International Energy Agency.

Last week, it said that to achieve zero net emissions by 2050, no new oil or gas fields can be developed. Period.

“And so if that’s the world you’re living in, you would expect that investors will question every single new investment,” Peloso said.

But it’s not just what oil companies stop doing. It’s also the technologies they develop. For instance, finding ways to pull CO2 out of smokestacks and the air.

“In terms of capturing carbon, they’re not quite there yet. But there’s an incentive now more than ever for these oil companies to figure it out,” said Carin Dehne-Kiley, senior analyst at S&P Global Ratings.

Figure it out and move the climate needle.

But not all fossil fuel companies can be poked and nudged by big investors on Wall Street.

“We also have state-owned oil companies from Russia and Saudi Arabia and other countries that are much less vulnerable to this kind of political pressure,” said Columbia law professor Michael Gerrard.

And to many observers, Big Oil’s business models have to fundamentally change — if we’re going to dial back the warming already underway.