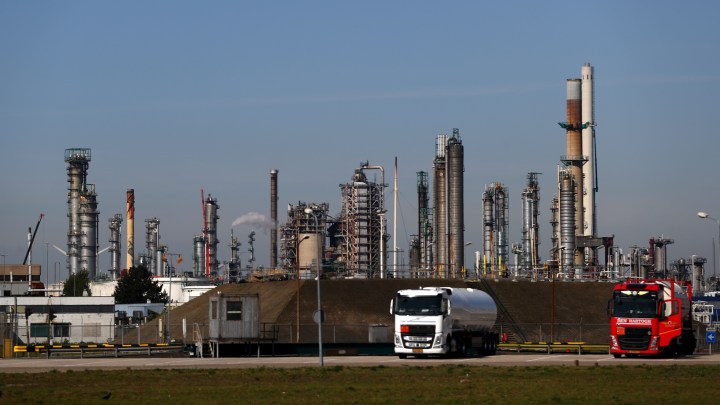 COPY
A general view of an Exxon Mobil refinery in Rotterdam, Netherlands in April 2020. Exxon-Mobil and Chevron report their earnings on Friday to optimistic investors. Dean Mouhtaropoulos via Getty Images

A general view of an Exxon Mobil refinery in Rotterdam, Netherlands in April 2020. Exxon-Mobil and Chevron report their earnings on Friday to optimistic investors. Dean Mouhtaropoulos via Getty Images
Listen Now

Two big oil companies — ExxonMobil Corp. and Chevron Corp. — report earnings on Friday, and the news is likely to be better than this time last year. Oil has been selling at above $70 a barrel for a little while now, but investors remain skittish about companies drilling more wells.

What big oil has traditionally done with profits is plow them back into expensive exploration projects, but the appetite for that kind of spending isn’t what it used to be.

“So, I think you see enhanced dividends, you see, you know, more share repurchases. I think those are two things that will come out of a lot of conference calls over the next two or three quarters. I mean, what else are they going to do with it?” said Trey Cowan, an oil analyst at the Institute for Energy Economics and Financial Analysis.

Ellen R. Wald, president of Transversal Consulting, has some ideas.

If the companies aren’t going to put the money into exploration, she said, “we could see more investment in other types of energy technologies, renewables, batteries, either developing new technologies or acquiring companies that have these technologies.”

She said when big companies are flush with cash, they often acquire other ones, in this case, those with new technologies or other oil companies.