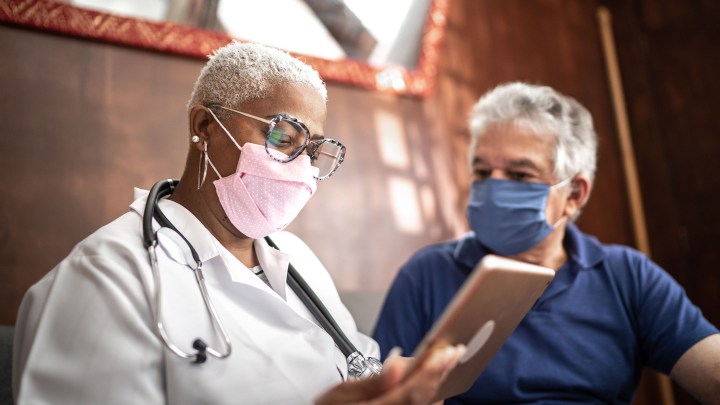 COPY
The pandemic recession has pushed so many people out of work that funding for Medicare Part A, via payroll taxes, is down. FG Trade via Getty Images
COVID & Unemployment

The pandemic recession has pushed so many people out of work that funding for Medicare Part A, via payroll taxes, is down. FG Trade via Getty Images
Listen Now

President Joe Biden’s $1.9 trillion fiscal stimulus relief package signed into law in March contains a huge expansion in the Affordable Care Act, possibly the biggest since it was signed into law 11 years ago. But thanks to the coronavirus, there’s another health care crisis brewing.

Medicare’s hospital insurance trust fund, which pays for the services one receives in hospitals, nursing facilities and more, is projected to become insolvent sooner than expected — within three to five years.

Marketplace senior economics contributor Chris Farrell spoke to “Marketplace Morning Report” host David Brancaccio about why the COVID pandemic is causing this funding issue and what could be done to address it. The following is an edited transcript of their conversation.

David Brancaccio: All right, we need to understand — what is the hospital insurance trust fund part of Medicare?

Chris Farrell: OK, Medicare’s incredibly complicated. Now, we know that it provides health insurance for some 53 million people, ages 65 and over. The hospital insurance trust fund — and I’m just going to call it a trust fund — it pays for hospitals, nursing facilities, hospice care. And you know, it’s better known as Part A, and Part A is funded by payroll taxes. Now, there isn’t a problem with some other parts of Medicare that you’ve probably heard of, like Medicare Part B and D. Both of those are financed by a combination of enrollee premiums and general tax revenue.

Brancaccio: All right, but there’s the A problem, Part A. The dynamic is that the pandemic recession here pushed so many people out of work that we weren’t paying the payroll taxes?

Farrell: That’s the core problem. I mean, Part A is funded with payroll taxes, and Part A has always faced this issue of insolvency ever since it was created, depending on what’s happening to the economy. And usually, the estimates [for insolvency] are out pretty far. But the current projection of three to five years is among the shortest on record. And here’s the key point: Whether the insolvency date, the depletion date, is 2024 or 2026, it’s just around the corner.

Brancaccio: Yeah, but I want to press on you here: “Insolvency” or “depletion date” has a connotation of the programs are actually circling the drain. They’re not going to shut down in a couple years?

Farrell: No, no, no. These are the terms that are used but these terms are not shorthand for bankruptcy. So assuming no change in policy, nothing is done, current projections are that the trust fund could pay about 90% of Part A bills. And what that then means, and this is what the experts are saying, is I think the most likely outcome is that the Part A bills would be paid, David, but with a delay. It could be a very long delay. And that payment uncertainty? That’s not good for providers, and it’s certainly not good for beneficiaries.

Brancaccio: I mean, but if there is a big boom, that follows all the vaccinations, maybe the problem fixes itself. You think it’ll be harder than that to keep it solvent?

Farrell: I think it will, because the timeframe is so short, and you may only buy yourself maybe an extra year. So this is something that Congress and the White House are going to have to address, because Medicare, along with Social Security, that’s the foundation of financial security for older people.

The U.S. is relaxing rules for medical professionals working across state lines