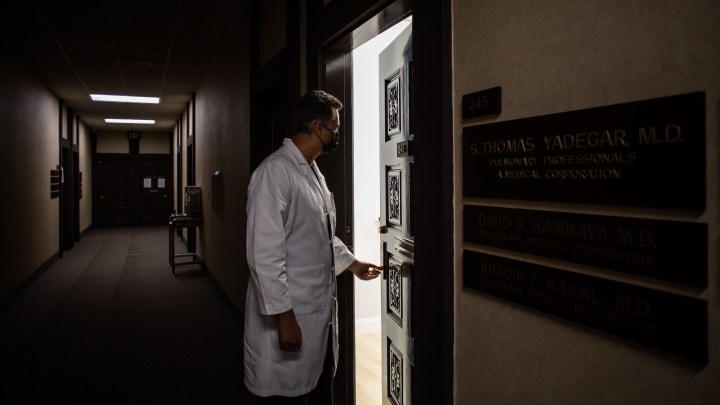 COPY
Research shows that a proposed Medicare age reduction would cost the federal government more but could save small businesses money. Apu Gomes/AFP via Getty Images

Calls for “Medicare for All” and universal health care have subsided a bit since the 2020 presidential campaign, as other priorities like infrastructure and voting rights take center stage, but many health care advocates are still pushing for a smaller — but significant — change: lowering the eligibility age for Medicare.

More than 150 House Democrats recently put out a letter calling for President Joe Biden to do just that, and to improve the program in general by adding dental, vision and other benefits to the program.

Such changes are in Biden’s budget proposal, with a call to lower the eligibility age for Medicare from 65 to 60, among other changes to the program. And there’s research explaining why many advocates see that as a good idea.

Joe Shrager, a surgeon and professor at Stanford’s School of Medicine, recently co-authored a study with colleagues indicating many cancer patients were waiting until they were eligible for Medicare before getting diagnosed or treating their cancer.

“And as a surgeon, I noticed in my practice that there seemed to be a sudden rise in the number of lung cancers I was treating in patients who had just turned 65,” he said. “And there’s no biological explanation for why there would be that kind of jump.”

But there is an economic one. In their late 50s and early 60s, people are at higher risks of cancers and other diseases, but they may not have insurance.

“I think it’s a window where our sort of work-associated insurance system tends to fail a lot of people, and it’s the same window when illnesses that are life threatening become more and more common,” Shrager said.

Judy Stein runs the Center for Medicare Advocacy, which works with potential and current Medicare recipients to ensure they receive benefits. The group also is pushing to expand and improve the program.

“So people go without teeth, they go without oral health care. They go without hearing, because they don’t have hearing aids, which aren’t covered by Medicare,” she said. “And they come to Medicare sicker, more vulnerable than they might have had there been adequate coverage before they came on to Medicare.”

But while it’s simple to explain lowering the Medicare eligibility age, the possibility comes with complex economic and political challenges, said Tricia Neuman, a senior vice president at the Kaiser Family Foundation.

“In many ways, the idea of lowering the age of eligibility was a compromise between those who are pushing for Medicare for all and candidate Biden, who now is President Biden, who wanted a strategy that would do more to build on the current system rather than replace it,” Neuman said.

As Kaiser Family Foundation research points out, lowering the eligibility age would increase costs for the federal government, even as it potentially lowered costs for businesses. The group’s research also found that while such a change could lower costs for many, it might not make a huge impact on covering the number of people who aren’t insured.

And there are still many interests opposed to the idea, Neuman said.

“[Health care] providers generally get paid less under Medicare than they would from an employer plan or private insurance plan,” she said. “And so I think if this proposal were to move forward and gain steam, it would not be a surprise to see serious opposition from the hospital industry and other health care providers.”

Depending on the nature of any changes to Medicare, there could be support coming from the small business community, according to Miriam Laugesen, who teaches health policy at Columbia University and wrote a book on health care prices.

“Employers, depending on the generosity of the benefits package, may see their employees choosing to insure themselves through the public system,” she said. “It really depends on the comparison between what employers are offering and what is available on Medicare. That would be a real win for small businesses.”

Of course, all of this depends on the details of any eventual plan, if there is one that can get congressional approval in a political atmosphere where it’s hard to get any legislation passed.

“I think that there’s a degree of pessimism around whether this will go forward, and that’s up to the political process,” Laugesen said.