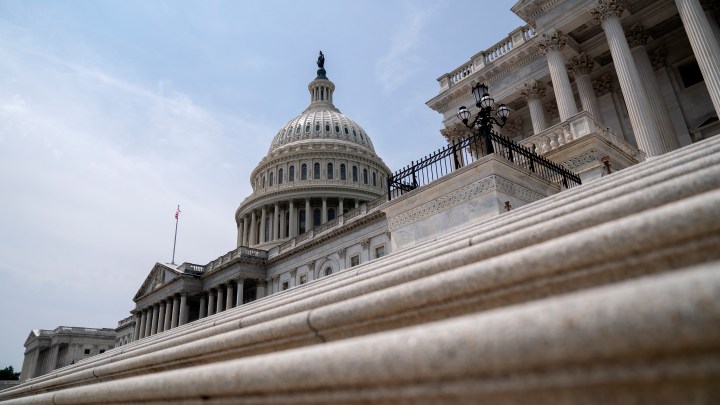 COPY
The Congressional Budget Office estimates that the Inflation Reduction Act will save Medicare $288 billion over the next decade. Stefani Reynolds/Getty Images

The Congressional Budget Office estimates that the Inflation Reduction Act will save Medicare $288 billion over the next decade. Stefani Reynolds/Getty Images
Listen Now

While the oil industry may be fine with what’s in the Inflation Reduction Act, another powerful special interest in Washington is not so happy: drugmakers.

That’s because the Democrats’ bill, approved by the Senate and on its way to consideration in the House, for the first time allows Medicare to directly negotiate the prices of some drugs on behalf of 48 million Medicare recipients.

Right now, drug companies negotiate separately with the private health plans that administer Medicare. That model helps keep drug prices three to four times higher in the United States than in the rest of the developed world, per Mariana Socal at Johns Hopkins.

It’s inefficient to have multiple entities negotiating simultaneously, Socal added, “versus having one entity negotiating for 40 million people at the same time. That’s how Walmart gets lower prices, right, when you negotiate for a higher volume.”

If a drug company doesn’t come to the table, the bill would hit them with a pretty big tax penalty. But more importantly, “it is in the best interest of the drug manufacturer to maintain their market share — and there’s no larger market than the Medicare program,” Socal said.

Initially, Medicare’s negotiating power would be limited to just 10 drugs that fit certain criteria. Basically, drugs that have been around a while, don’t have cheaper substitutes and that Medicare spends a lot on.

“Drugs like Orencia for rheumatoid arthritis,” said Andrew Mulcahy, a health economist at the Rand Corp. Or pricey cancer therapies.

The Congressional Budget Office estimates the bill will save Medicare $288 billion over the next decade. Those savings might spill over, Mulcahy added.

“The arguments that the government would craft when they negotiate price might be pretty persuasive and help commercial insurers secure some lower prices on their end too,” he said.

But Mulcahy said drug companies might raise prices on non-Medicare plans to make up the lost revenue. The bill may have other unintended consequences, said Jenny Bryant at the pharmaceutical industry lobbying group PhRMA.

“The bill is going to really slow medical progress, we would argue, by putting a chill on research and innovation,” she said.

If the bill becomes law, the negotiated prices wouldn’t take effect until 2026.