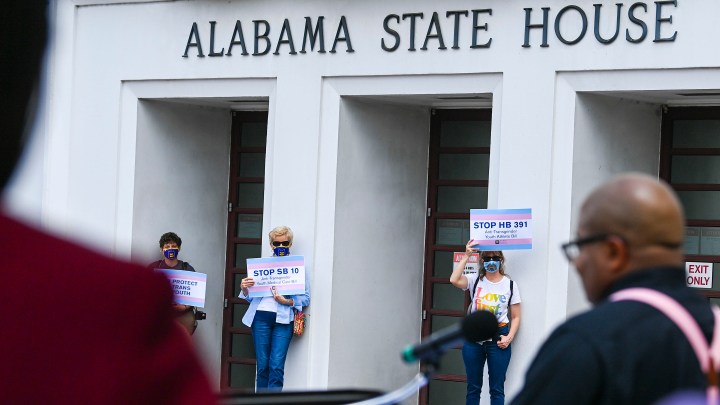 COPY
Opponents of several bills targeting transgender youth attend a rally at the Alabama State House to draw attention to anti-transgender legislation introduced in the state, on March 30, 2021 in Montgomery, Ala. Julie Bennett/Getty Images

Opponents of several bills targeting transgender youth attend a rally at the Alabama State House to draw attention to anti-transgender legislation introduced in the state, on March 30, 2021 in Montgomery, Ala. Julie Bennett/Getty Images
Listen Now

In 2016, North Carolina passed what became known as the “bathroom bill,” restricting transgender people’s access to restrooms aligned with their gender identity. The backlash was swift: Bruce Springsteen and Pearl Jam canceled concerts, the NBA moved its All-Star Game and PayPal dropped plans to build a new facility in Charlotte.

“Lawmakers there knew they had to take action, because they stood to lose about $3.7 billion,” said Derrick Clifton, a contributing writer at them.us, a digital LGBTQ magazine.

The boycotts worked; the law was eventually repealed. But as a growing number of Republican-led states pass anti-transgender legislation this year, Clifton wondered: Where is the outrage this time?

“So far, we have not heard much of anything, or seen any type of economic action from the corporations or the entertainers,” they said.

A recent PBS NewsHour/NPR/Marist poll found that most U.S. voters oppose laws restricting transgender rights. More than 90 companies have signed a statement from the Human Rights Campaign condemning state anti-LGBTQ legislation, including bills targeting transgender youth. Amazon, Google, Marriott and Pfizer are among the corporations that have signed.

One difference this time is the sheer scale of these bills, said Gillian Branstetter with the National Women’s Law Center. Last week West Virginia joined Alabama, Arkansas, Mississippi, South Dakota and Tennessee in enacting bans this year prohibiting transgender athletes from participating on sports teams aligned with their gender identity. Idaho passed such a ban last year, but the law has yet to take effect pending a court ruling on whether it violates the U.S. Constitution. Arkansas also banned gender-affirming health care for transgender youth.

“The fact that we’ve seen seven, I believe, now signed into law just since the beginning of the year, that makes a corporate response a little bit more complicated,” Branstetter said.

There’s another nuance this year, said Charlotte Clymer, a writer and LGBTQ advocate. After Georgia passed a law to restrict voting rights, activist Stacey Abrams cautioned that boycotts, while effective, often hurt the most marginalized people.

“I think a lot of corporations that have been watching that situation are kind of examining boycotts in other areas, too,” Clymer said. “There’s concern there, and there’s rightful concern.”

But as more of these bills stack up, and people understand how they harm trans children, activists say calls for boycotts may grow.

According to the Human Rights Campaign, more than 400 corporations have backed the federal Equality Act passed earlier this year by the House. The bill would prohibit discrimination on the basis of sexuality and gender identity.