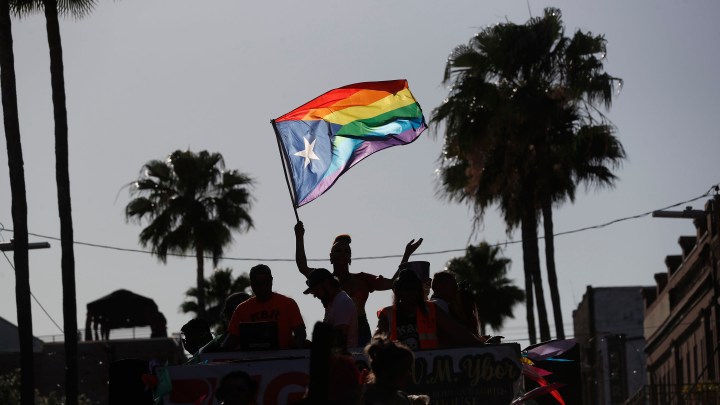 COPY
Amazon, Apple, CVS, General Motors, Kellogg’s and Starbucks are among the household brands that have come out against anti-LGBTQ laws in various states. Octavio Jones/Getty Images

Amazon, Apple, CVS, General Motors, Kellogg’s and Starbucks are among the household brands that have come out against anti-LGBTQ laws in various states. Octavio Jones/Getty Images
Listen Now

The list of states passing laws that target LGBTQ rights is growing. Last week, the governors of Arizona and Oklahoma signed bills preventing transgender girls and women from playing on sports teams that align with their gender identities. That followed Florida’s passage of the so-called “Don’t Say Gay” education law.

Meanwhile, the Human Rights Campaign, an LGBTQ advocacy group, says more than 220 companies have signed a statement opposing such legislation, including some of the largest businesses in the world.

Amazon, Apple, CVS, General Motors, Kellogg’s and Starbucks are among the household names that have come out against anti-LGBTQ laws, saying they’re bad for business. Take recruiting, for instance, said Jay Brown with the Human Rights Campaign: “If you’re an LGBTQ employee, you’re going to look in places where governors are doing right by the community and not attempting to essentially erase us.”

Suzanne S. is a tech consultant who’s planning to leave Texas because of its policies. (Her last name is withheld here because she’s the mother of a transgender child.) Texas governor Greg Abbott recently ordered the state to investigate parents for child abuse if their kids receive gender-affirming health care.
A district court has temporarily blocked investigations, pending litigation, but that’s little comfort for Suzanne.

“I have had many recruiters try to recruit me to their companies,” she said. “And I’ve said time and time again, that we’re leaving Texas and to please communicate this to your owners, hiring managers that this was the case.”

More than 60 companies signed a full-page ad in the Dallas Morning News calling on Abbott to reverse the order. Matt B., the father of a transgender child in Austin, would like to see businesses to do more than sign statements.

“That’s a veiled economic threat, but with no teeth to it,” he said. “I would say to those companies, put your money where your mouth is.”

Jessica Shortall is managing director of Texas Competes, a coalition of employers promoting an inclusive business climate. “There are some corners where it’s very fashionable to be seen as anti-corporate, so, what is happening with greater frequency is that they’re making that case privately,” she said.

And she points out that of the hundreds of anti-LGBTQ state bills filed in the last decade, most have failed.

Many states still don’t have protections for LGBTQ workers