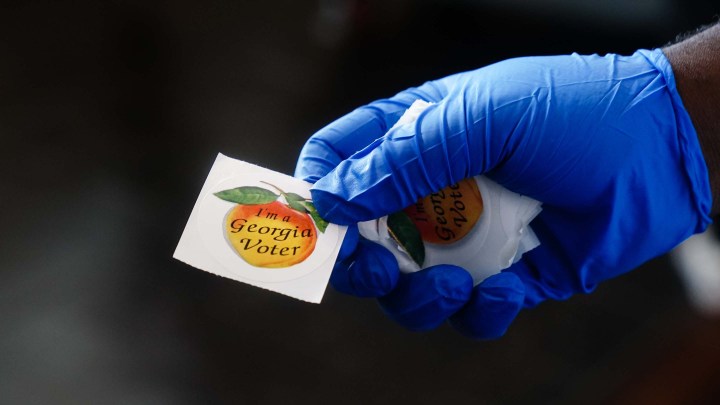 COPY
Activists are asking corporations in Georgia like Coca-Cola, Delta Airlines and Home Depot to speak out against a new law that overhauls state election rules. Elijah Nouvelage/Getty Images

Activists are asking corporations in Georgia like Coca-Cola, Delta Airlines and Home Depot to speak out against a new law that overhauls state election rules. Elijah Nouvelage/Getty Images
Listen Now

Georgia Gov. Brian Kemp has signed a bill into law that overhauls the state’s election rules. It expands early voting on weekends and creates a hotline where residents can report suspected voter fraud. It also restricts voting in a number of ways — for instance, shortening the window in which someone can request an absentee ballot and limiting the number of ballot drop boxes. Critics say the law will make it harder to vote, particularly for Black residents.

The new law also makes it illegal to hand out food and water to people waiting in line to vote.

“Well, who has to wait on long lines to vote in Georgia? Those are in Black neighborhoods. Every study has confirmed that,” said Michael Waldman, president of the Brennan Center for Justice at NYU School of Law.

The law also makes it harder for counties to set up mobile voting units, which are basically buses that have polling stations in them and are an alternative to those long lines.

“This is directly targeted toward Fulton County, because Fulton County was the only county that had mobile buses,” said Aklima Khondoker, state director for the Georgia chapter of All Voting is Local, a voting rights group.

The city of Atlanta, which is majority Black, makes up most of Fulton County. So activists are asking corporations in Georgia like Coca-Cola, Delta Airlines and Home Depot to speak out against this law.

This is not a new idea. We can look back at Martin Luther King Jr.’s final speech, said Ciara Torres-Spelliscy, a professor at the Stetson University College of Law.

“He talks about holding Wonder Bread accountable for its positions on civil rights,” Torres-Spelliscy said.

He also calls out Coca-Cola and tells people to boycott its products, which some activists are calling for now.

There’s a reason activists are making demands of companies like Coke, Torres-Spelliscy said. It’s not just because they’re based in Georgia.

“Coca-Cola gives to Republican politicians in Georgia, including the politicians who pushed for this voter suppression law and the sitting governor,” she said.

In other words, they’re already involved in politics. And the thing is, when companies get into politics, they’re going to anger somebody, even if they don’t say much.

“If you don’t take a stand, you’re opening yourself up to criticism of being complicit in legislation that is widely seen as violating individual rights,” said Dana Radcliffe, who teaches business ethics at Cornell and government ethics at Syracuse University.

In a statement, Coca-Cola said it believes voting is a foundational right and that access should be broad-based and inclusive. Delta said it worked with legislators to make the law less restrictive. Home Depot said the company believes all elections should be “accessible, fair and secure.”