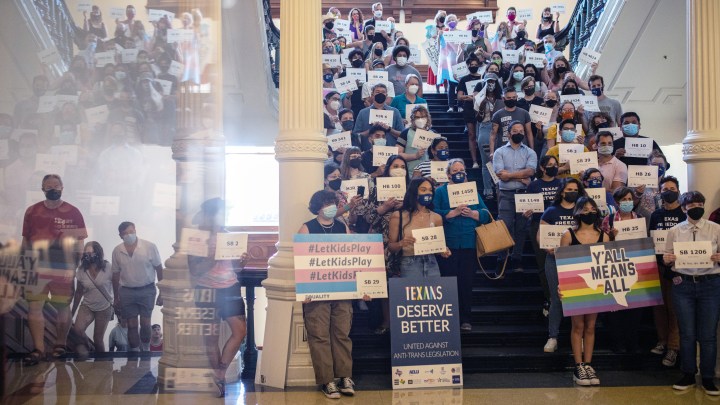 The moment “K” knew her family had to leave Texas, she was driving with her 10-year-old daughter.

“She was in the backseat behind me, and so we were going from acting class to go get a doughnut, to get a treat,” she recalled.

K’s daughter, “O,” is transgender. (The family asked to be identified by initials to protect their privacy.) Texas Gov. Greg Abbott had recently ordered state agencies to investigate parents who provide gender-affirming medical care to transgender children for child abuse. Such care includes medication that delays puberty for younger children and hormone therapy for older teens.

Some family friends were planning to protest the governor’s order, and K asked her daughter if she’d feel comfortable saying a few words about being a trans kid. But first K had to explain what the order meant — that O’s parents, teachers and doctors could get in trouble for helping her live as a girl.

K was still driving and couldn’t see her daughter’s face. She pulled over, threw the car into park and jumped out. “Oh my gosh, no,” K consoled her daughter. “Why would you ask me that?”

“And she said, without a beat, ‘Because everybody hates me,’” K said. “That was when I just knew, I can’t do this.”

K and her husband are both lifelong Texans. They’d talked before about whether to leave as the state’s Republican-controlled legislature proposed bill after bill targeting transgender youth. All but one of them — restricting trans kids’ access to sports — failed. Now, the fear that child protective services might come knocking on their door was too much to bear.

When K got home that evening, she told her husband, “I don’t want to go into some small room for my supervised visit with my children, where I explain, ‘We could have left, but we were too late.’”

So they’re putting their house on the market and moving to Portland, Oregon.

Marketplace spoke with several families facing similar decisions. For their families’ safety, most asked us not to use their full names. Suzanne, in Austin, is the mother of an 11-year-old transgender girl. They’re planning to leave the state as soon as their lease is up this summer.

“My daughter has already been in the process of getting an implant that blocks her hormones, and so we feel very scared,” she said. “We are doing our best to lay low and try to figure out how to get out of here as soon as possible.”

Many hospitals in the state have stopped providing reversible puberty blockers and hormone therapy to transgender youth, even though their use is supported by the American Academy of Pediatrics, the American Medical Association and many other health care groups. After civil rights groups sued the state to challenge the governor’s directive, a district court judge temporarily blocked enforcement of the order, scheduling a trial for July.

Suzanne said she’s not sure where her family will go. Advocates have been sharing maps identifying states with strong LGBTQ protections, including California, Colorado and much of the Northeast.

Others have already left. Camille Rey moved from the Austin area to Potomac, Maryland, last August, with her three children, her father and a Mexican hairless chihuahua mix named Ivan. Rey had been active in the fight against anti-trans legislation in Texas, and one day her transgender son, Leon, asked to come with her when she testified at the Capitol.

“He ended up having to hear some very hateful and difficult things for a child to hear,” Rey said. “He ended up getting chronic stomach aches and missing a lot of school and almost failing second grade.”

Now, she said, 9-year-old Leon is doing much better. He can just be a kid.

“The schools are accepting and supportive of Leon,” she said. “Everyone that I talk to or tell our story of how we got here and why, they’ve all been supportive, from the guy at the UPS store, to Leon’s teacher, to whoever I end up telling the story.”

The move has taken a financial toll. Rey is a science writer and was able to find a new job, but Leon’s father has to commute back to Austin for a week every month. They had to tap the kids’ college savings to pay for the move.

The exodus has been hard on those who remain in Texas and on the transgender adults who’ve been fighting alongside these families.

“I firmly expect that most of the community of parents that I’m connected with will be gone 12 months from now, and it feels really bad,” said Remington Johnson, a Presbyterian minister and soon-to-be ICU nurse in Austin who has been working to oppose anti-LGBTQ legislation. Though she understands why families are leaving, she said, “it makes me feel less safe.”

Not everyone can afford to leave or has the job flexibility. Ed, in San Antonio, shares custody of his transgender daughter with his ex-wife, so there are two households involved. He and his current wife both own businesses.

“I’ve been in business for 20 years in Texas, and I’m a native Texan,” he said. “It’s pretty devastating to think about having to just kind of up and leave.”

For these families, not supporting their children’s gender identities is unthinkable. They’ve listened to their kids, done tons of research and consulted mental health and medical experts. Like many parents of transgender children, Ed saw a cloud lift when his daughter could just be herself.

“That’s a joy of parenting, knowing that you’re getting it right because she’s so much happier and doing better in school,” he said. “There’s no question.”