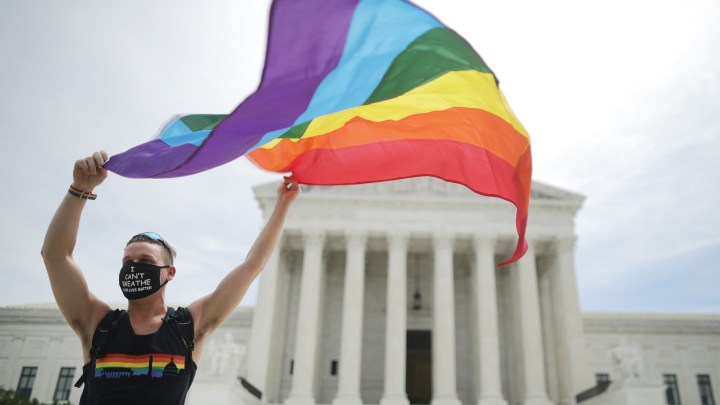 COPY
An activist holds a Pride Flag outside the U.S. Supreme Court on Monday after the Court ruled LGBTQ people cannot be fired for their sexual orientation. Chip Somodevilla/Getty Images
Workplace Culture

An activist holds a Pride Flag outside the U.S. Supreme Court on Monday after the Court ruled LGBTQ people cannot be fired for their sexual orientation. Chip Somodevilla/Getty Images
Listen Now

Before a Supreme Court ruling Monday, it was legal in about half of states to fire someone for being gay or transgender. But in a 6-3 decision, the high court said protections based on sex under Title VII of the 1964 Civil Rights Act extend to sexual orientation and gender identity.

Workplace discrimination, including being fired, not hired, paid less or harassed has contributed to economic disparities experienced by LGBTQ workers.

In a 2019 study with the Williams Institute at the UCLA School of Law, she also found higher poverty rates for LGBTQ people: 22% versus 16% of the population as a whole, with transgender people and bisexual women experiencing even higher rates.

Those effects are especially acute in states that don’t have discrimination laws, said Christy Mallory, the Renberg senior scholar and the state and local policy director at the Williams Institute. In Arizona for instance, LGBTQ adults were twice as likely to report they didn’t have enough money for food.

“We see that those are not only states that don’t have a supportive landscape, but the social climate is also not as supportive of LGBT people,” she said.

A 2017 survey by the Center for American Progress found a culture of discrimination influences workers in less direct ways too: Many take steps to avoid exposing themselves to discrimination in the first place, said policy director Sharita Gruberg.

“This could look like choosing where to live, where to work, what they would disclose in employment applications,” she said. People in same-sex relationships also change jobs less frequently. All are factors that can lead to lower earnings in the long run.

Transgender people are often the hardest hit, experiencing much higher unemployment and poverty.

Shannon Minter, an attorney who has represented plaintiffs in discrimination cases and serves as the legal director of the National Center for Lesbian Rights, said there’s often a direct link between a transgender person’s economic and physical security.

“When you’re economically marginal and you’re homeless or semi-homeless, and the only way you can make a living is by doing things that are outside the law, that puts you directly in harms way,” he said.

The Supreme Court ruling, he said, will help ensure that the discriminatory practices that marginalize people can be addressed through the legal system.

And a fairer labor market for LGBTQ workers will benefit the broader economy, Badgett said.

“Discrimination means people aren’t being used efficiently. Their knowledge, their skills or creativity are not being fully utilized by our economy. And that holds us all back,” she said.