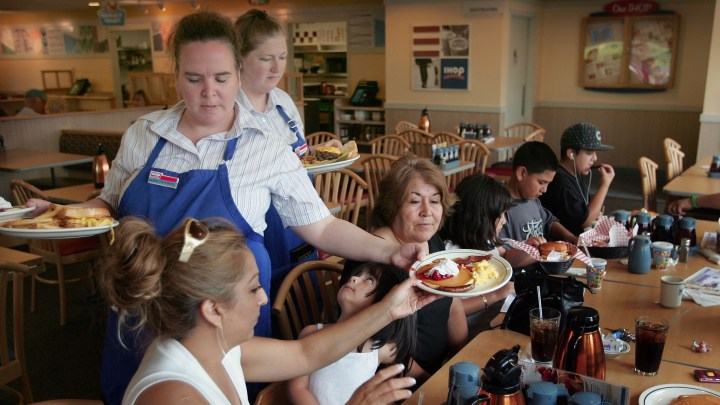 COPY
IHOP, as well as other restaurants and retailers, is hiring people to meet an expected increase in customer demand. Scott Olson/Getty Images

IHOP, as well as other restaurants and retailers, is hiring people to meet an expected increase in customer demand. Scott Olson/Getty Images
Listen Now

We’ve talked a lot about pent-up demand. This idea that people will spend more money after they get vaccinated. That they’ll go to restaurants and buy clothes to wear to those restaurants and on vacations.

Retailers are preparing. Dollar General just announced that it’s hiring up to 20,000 workers. And other chains, like IHOP, Taco Bell, and McDonald’s, are also on hiring sprees.

“These employers are clearly anticipating a huge surge in demand through the summer, through the end of the year, as people start to feel safe,” said Andy Challenger, senior vice president at the Challenger, Gray & Christmas outplacement firm.

A lot of people are worried about contracting COVID-19, and they’re asking themselves, “do I want to go back into retail and work in an environment with, you know, high contact with other employees and customers? Or do I want to consider a work-from-home job?” said Shawn Ashworth, managing director at AlixPartners.

A lot of people who used to work in retail have probably found other jobs, at home or not.

“During the period when retail wasn’t hiring many people, other sectors were: manufacturing, warehouse and driving jobs, pharmacy and other health care-related jobs,” said Jed Kolko, chief economist at Indeed.

One obvious way for retailers to attract workers would be to offer more money, and Andy Challenger said some are paying bonuses. “But when you look at small retailers and small restaurants, those businesses have been under enormous pressure for a year. It’s been a really, really difficult environment.”

It’s easier for the big retailers.