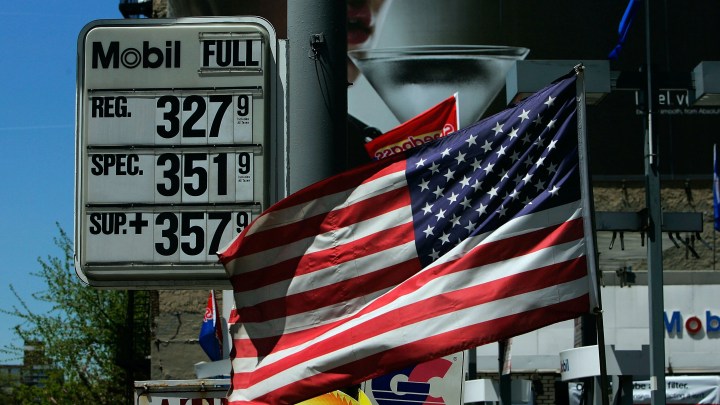 COPY
Gas prices are a key statistic when it comes to inflation, especially for people who do a lot of driving. Chris Hondros/Getty Images

Gas prices are a key statistic when it comes to inflation, especially for people who do a lot of driving. Chris Hondros/Getty Images
Listen Now

If you pay attention to business and economic news, you’ve likely heard a more than passing reference to concern about inflation. That’s the measure of increases in the cost of goods and services.

Some people are worried that with things starting to reopen and pent-up demand and all the stimulus in the economy, prices are going to go up.

Notably, Federal Reserve Chair Jerome Powell is not one of those people.

But there’s how the government looks at inflation, and then there’s what inflation feels like for you and me.

Inflation isn’t inherently bad. It can signal a growing economy. To keep it simple, it’s a way to look at what it costs to get by.

Economist Carola Binder, who teaches at Haverford College in Pennsylvania, said inflation can be a major focus for policymakers, but “most consumers don’t think about it much at all. Or if they do, they might notice that prices of things that they buy frequently are going up.”

If you drive a lot, maybe you notice gas prices. If you have a chronic condition, health care prices.

Stephen Cecchetti, a professor at the Brandeis International Business School, said: “So remember, you only see on a daily or weekly basis, a small part of what you spend.” But government economists? “They look at everything, and they look at what everybody’s doing on average.”

To deal with this disconnect, said Tony Rodriguez, who heads fixed-income strategy at the investment firm Nuveen, economists strip out volatile data like gasoline prices, which can spike, say, when a big ship gets stuck in the Suez Canal.

But policymakers also try to educate consumers because “as a broader segment of the population begins to expect higher inflation, their behavior changes, like a self-fulfilling prophecy in a way,” Rodriguez said.