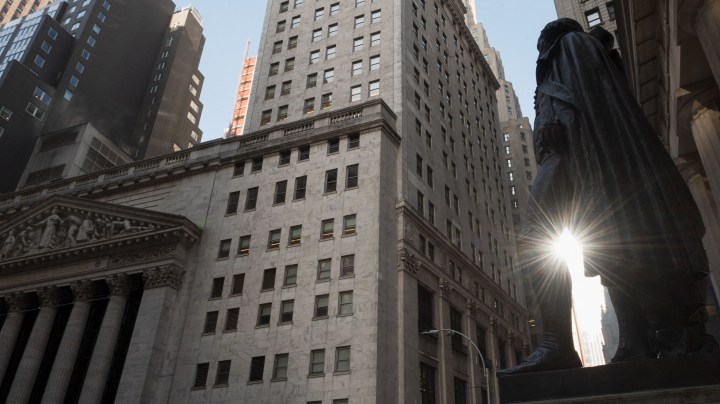 COPY
Inflation could be one of the reasons bond buyers are demanding higher yields. Angela Weiss/AFP via Getty Images

Inflation could be one of the reasons bond buyers are demanding higher yields. Angela Weiss/AFP via Getty Images
Listen Now

The yield on the 10-year Treasury has moved sharply upward this past week. Investors are demanding more in return for holding onto those bonds, a reflection of what they see happening in the economy.

Those investors loan the government money for 10 years and get paid for doing that — the payment is called the yield. When the yield goes up sharply, “it’s basically the market saying they want to be paid more for the risk of lending out further,” said Jonathan Mondillo, head of municipal bonds at Aberdeen.

What would make a bunch of bond buyers demand to get paid more? It could be that they realize they have better options elsewhere. “It’s indicative of the strength of the economy,” Mondillo said.

If you expect the economy to be offering up investment opportunities that are better and coming sooner than you previously thought, you might think twice about leaving your money in bonds with mopy, dumpy yields. And, Mondillo added, bond investors are looking at a strong economy in 2022.

“When you talk about corporate earnings, they’re still very strong. When you look at GDP growth, it’s still strong,” he said.

There’s something else that’s got bond investors demanding higher yield: inflation, according to Gregg Lemos-Stein at S&P Global, a current Marketplace underwriter.

“Rising inflation erodes the return that the holder of the bond, or loan, is holding over time,” Lemos-Stein explained. “So, if you’re getting 5%, that’s great if inflation is zero, but if inflation is 5%, then your real return, essentially, is zero.”

Future inflation expectations have risen. The Fed itself pushed up inflation estimates for this year.

It’s still an open question as to what’s going to happen with inflation in the coming years but, noted Stein, the verdict from the bond market is that it’s going to be higher than bond investors thought it would be only a week ago.