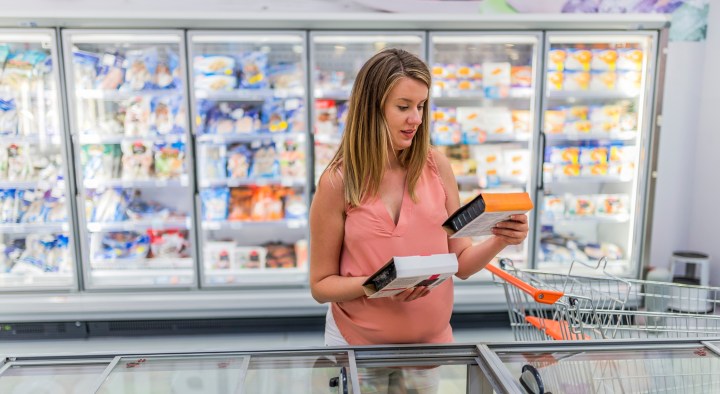 Frozen food sales in the U.S. rose by almost 24% between February 2020 and last month. ljubaphoto/Getty Images

As the COVID pandemic destabilized the economy and disrupted lives, Americans turned to sweatpants, alcohol and cookbooks to help them cope.

Sales of these items rose in 2020 as people looked to the things that comforted them (as evidenced by the endless bread-making attempts that you probably saw on your social media feeds).

But with lockdowns and limited social gatherings, other areas — like the movie theater industry — suffered. And despite record unemployment, the world’s wealthiest people continued to make trillions collectively.

Conventional indicators, like the jobs report and auto sales, have highlighted how the COVID-19 crisis has upended the way we live. However, other data sets can also reveal the ways the pandemic has changed us.

Here’s a look at what a few of those unconventional metrics from the past year tell us about the state of the economy and our changing shopping habits.

The rich got richer

Although nearly 80 million people have filed for unemployment benefits since the pandemic started, America’s billionaires ended up seeing their collective wealth increase.

Their total wealth climbed from $2.95 trillion in March 2020 to more than $4.2 trillion last month, according to The Americans for Tax Fairness and the Institute for Policy Studies.

There are now 657 billionaires in the U.S., with 43 who became billionaires during the pandemic. The group includes the likes of Amazon’s Jeff Bezos (who saw his own wealth grow by $67 billion over the past year), Tesla’s Elon Musk and Facebook’s Mark Zuckerberg.

For scale, the collective wealth that these 657 people hold would be enough to pay for President Joe Biden’s $1.9 trillion relief package twice over, with billions to spare.

With that amount of money, you’d also be able to give every single American, including children, a $12,900 stimulus check.

As states began to issue stay-at-home orders last spring, 16% of U.S. adults said they were drinking alcoholic beverages more often, according to an April survey from Morning Consult.

Lipstick sales have typically thrived during downturns, serving as an economic indicator of sorts. The reasoning goes that consumers can keep up their appearance without having to spend a lot of money, according to Juliet Schor, a professor of sociology and an expert on consumer culture at Boston College.

However,  this recession was fueled by a worldwide pandemic where people have had to social distance and wear face masks. Not exactly an occasion to wear makeup.

While the U.S. prestige beauty industry generated $16.1 billion in 2020, sales were down 19% compared to the previous year, according to The NPD Group. Makeup sales, specifically, declined by 34%, skincare by 11%, and fragrance by 8%.

Hair products, on the other hand, rose by 7%. Olivia Guinaugh, a home and personal care analyst with Mintel, told Marketplace last October that as professional beauty services shut down, some consumers took a DIY approach to hair care. That ended up leading to an increased use of items such as at-home hair color.

Fashion took a hit as more people began to work at home and stopped attending social gatherings, with total apparel sales declining by 19%, according to The NPD Group and Consumer Tracking Service.

But casual clothing, as one might expect, thrived. Sweatpant sales increased by 17%, sports bra sales by 10% and sleepwear by 6%.

And after the pandemic is over, preferences for a more comfortable wardrobe might be here to stay. An NPD survey found that 70% of consumers say they plan to dress just as or more casually than they did prior to the pandemic once they return to work and other activities.

While the U.S. box office pulled in nearly $900 million at the beginning of 2020, sales plummeted as the pandemic began. In April, theaters pulled in roughly $52,000 in the U.S (although drive-in movie theaters began to make a comeback).

Major theater chains, like AMC and Regal, closed their doors and had to delay their slate of blockbuster summer movies.

They reopened after a five-month shutdown, which led to a pick up in sales. By September, the box office gross in the U.S. totaled more than $81 million. However, soon after, large theaters began to shut down again.

Last year, the demand for a furry companion was so high that some animal shelters across the country reported being out of adoptable animals.

Rescues reported dozens of applications for individual dogs, while breeders said they had waiting lists that stretched well into this year.

As a result, durable dog and cat pet care products are estimated to have reached $5.7 billion in sales in 2020 — a 9.9% increase from the previous year, according to the market research firm Packaged Facts.

Products like collars, leashes, beds and toys all rose thanks in part to the pet adoption boom.

The frozen food aisle was popular

Frozen food sales in the U.S. rose by almost 24% between February 2020 and February 2021, raking in about $67 billion in sales, according to data from Nielsen Answers.

Frozen pizzas, ice cream, vegetables complete meals all sold more than the previous year as restaurants closed and consumers were craving comfort foods. During the early days of the pandemic, people were buying so much frozen food that freezer sales also skyrocketed.

Even before the pandemic, frozen food had been experiencing a renaissance because they were time savers. TV dinners and Eggo waffles had risen in popularity thanks to millennials.

People learned to make their own bread

Print books ended up having their bestselling year in the U.S. since 2010, according to the NPD Group. Unit-sales volume in 2020 rose by 8.2%, reaching 751 million units.

And with more people staying at home and attempting to improve their skills in the kitchen, cookbook unit sales also reached 23 million last year — up 16% compared to the previous year.

The possible reasons behind breadmaking’s popularity? “There’s the kneading the dough with your hands. There’s the distinct way that the yeast smells,” Amy Bentley, a professor of food studies at New York University, told Marketplace. “And then I’m not sure that there’s any better aroma than baking bread.