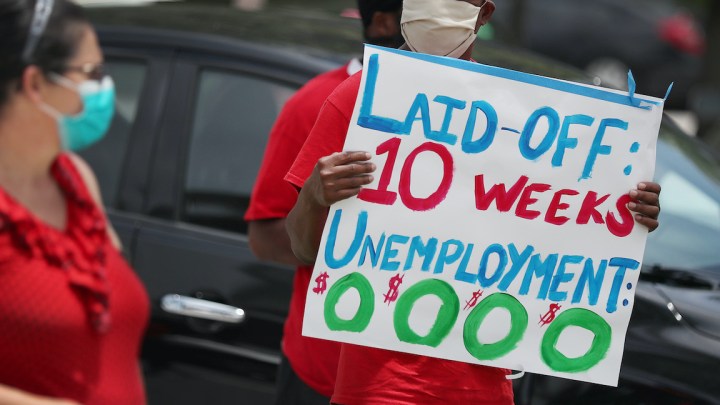 COPY
For the past 51 weeks, first-time claims have been higher than at any time during the Great Recession. Joe Raedle/Getty Images
COVID & Unemployment

For the past 51 weeks, first-time claims have been higher than at any time during the Great Recession. Joe Raedle/Getty Images
Listen Now

Seven hundred twelve thousand — that’s how many Americans filed first-time claims for unemployment last week. That’s about 6% fewer than the week before, and a big improvement over the worst weeks of the early pandemic, just about a year ago, when the number went into the millions for a couple of months. But it’s still way worse than the number 52 Thursdays ago: just 211,000. We took a dive into a year’s worth of unemployment numbers.

To try to get a sense of the scale and severity of unemployment over the past year, we went to three of the smartest economists in our Zoom room and asked what number they think best explains where we are right now.

Let’s start with Andrew Stettner at The Century Foundation. His number: 51. “Fifty-one consecutive weeks of more than a million initial claims for unemployment benefits.”

That’s regular state jobless claims plus claims under special federal programs for gig workers, parents stuck at home with kids and others who usually aren’t eligible for benefits.

And for those 51 weeks, first-time claims have been higher than at any time during the Great Recession.

Now to Julia Pollak at ZipRecruiter. Her number: 20 million. “There are 20 million people receiving unemployment benefits across all programs. That is a huge, huge, number. So at the peak of the Great Recession, that number only got up to about 6.5 million.”

Were it not for those federal programs for gig workers, parents and the like, about 8.5 million fewer out-of-work Americans would be getting unemployment benefits right now.

And finally, Joe Brusuelas at RSM Consulting keeps coming back to 40%. “Revenue among small businesses is down almost 40% since January of 2020. And about 40% of the businesses that were open then are no longer open.”

That’s businesses with 10 or fewer employees, and revenue under $10 million. Brusuelas said recovering the jobs lost at those businesses could take a very long time.