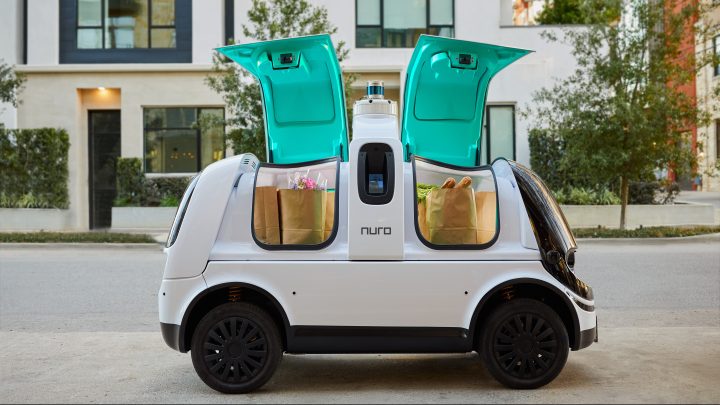 COPY
This Nuro vehicle is built to transport packages, not people. Nuro

This Nuro vehicle is built to transport packages, not people. Nuro
Listen Now

Lyft passengers in Las Vegas can already hail a self-driving taxi. It’s one of the first times vehicles with no human behind the wheel are being tested on city streets.

Late last month, Intel’s self-driving venture, Mobileye, announced that it will power self-driving shuttles in Europe by 2023. Those vehicles look like tiny buses. Not exactly the sleek, rounded corners of a Maserati.

The look is actually part of a deliberate strategy to solve challenges posed by these futuristic vehicles, since they are actually robots that travel at highway speeds.

Car designers want to get us comfortable with that idea by making these robots on wheels cute. They look like overgrown toys, sort of like Tonka trucks or something out of a Lego set.

Daniel Hundt, the head of design at the startup Nuro, explained: “To some degree, it has to be redefined what robots mean, right?”

Nuro is working on a vehicle that is essentially two cargo trunks side by side with flip-up doors. It’s designed to haul groceries, not people.

Hundt believes that “approachability is really important if you want to build that bridge between technology and humans,” so he designed the Nuro as a minicar. It sort of looks like a shrunken Volkswagen bus or a squat Thomas the Tank Engine. It’s actually too small to fit a grown adult.

Even though no human is driving it, Hundt gave it a sense of the familiar with a heavily tinted windshield.

“This sort of idea came from a motorcycle helmet,” he explained. “And technically, we do not need a windshield up front, but we felt like we needed to give the object an area that alluded to something that was more traditional.”

Hundt said they tested without the windshield first, and that didn’t go over so well.

Meanwhile, the Zoox robotaxi is big enough for people, but there’s still no driver.

It’s basically a boxy carriage. There are red lights to signal in the back, white lights in front.

They’re LED lights, so they just switch colors when the car switches direction.

Chris Stoffel, who leads the industrial-design team at Zoox, said they had latitude to re-imagine what a car is, so “our symmetrical design functionally allows us to have bidirectional capability in a dense urban environment in the city.”

It’s not just efficient on traffic-clogged streets. The company says it’s also efficient in the factory, cheaper to make because the car is four virtually identical quarter chunks that are basically snapped together.

These concepts seemed to appeal to Amazon. It bought Zoox last year. Stoffel said that ultimately, what matters is what customers think. “And that’s really our goal, right? To get people excited about the technology.”

Stoffel explained that putting together the vehicle’s large components as if they were Legos “allows us to have a very streamlined approach to manufacturing and service. And that’s exactly what we’re looking for.”

A lot of this is about emotion, according to Paul Snyder, who teaches automotive design at the Detroit-based College for Creative Studies.

He said designers have to combat a sense of the foreign … by adding cues of the familiar. “As of right now, we don’t have a lot of robots on our streets. So we’re still in a very, very nascent stage of the, you know, the design, the engineering and the appearance of these sentient machines, or quasi-sentient machines.”

Since all of this is so new, designers are playing it fairly safe for now, hoping to get us humans comfortable with cars driving us instead of the other way around.