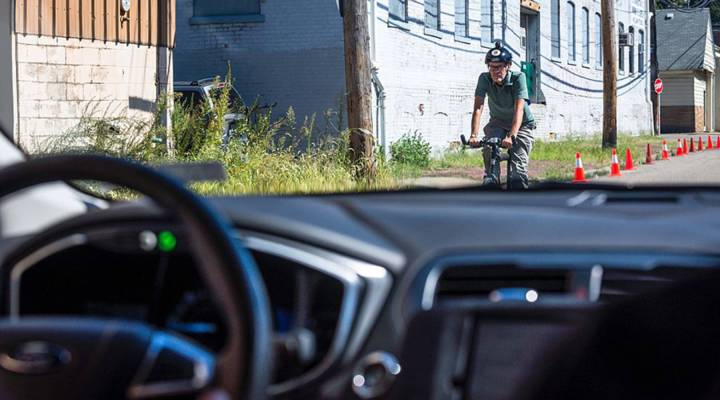 A biker passes a pilot model of the Uber self-driving car in 2016 in Pittsburgh, Pennsylvania. ANGELO MERENDINO/AFP/Getty Images
Listen Now

One of the big challenges for companies developing driverless cars is how those vehicles perceive the world around them. As the recent fatal accident in Arizona involving an Uber autonomous vehicle made clear, the technology has a long way to go.

One new area of research is on rural roads that haven’t been intricately mapped for every bump and turn. Daniela Rus is director of the Computer Science and Artificial Intelligence Lab at MIT and has a new study out today  that works to address the problem of driving on country roads. She spoke with Marketplace’s Amy Scott. Below is an edited transcript of their conversation.

Daniela Rus: Today’s state-of-the-art autonomous driving systems rely very heavily on detailed and highly accurate prior maps. Outside of urban areas, it is very challenging to build these detailed maps. We decided to look at whether it is possible for an autonomous car to drive in the absence of these maps, and using the same sensor suite as today’s autonomous systems, we developed a new type of planning algorithm that enables the car to navigate on roads that have not been mapped previously.

Amy Scott: You tested this on back roads in Massachusetts. How did it go?

Rus: The car does really well. It can drive at speeds of 30 to 45 miles an hour on country roads that have not been mapped before. Another important thing about country roads — the environment is not varied. In a map system, where the system is looking for special features to be able to differentiate different parts of the road, it’s more challenging, and with our system we are able to navigate despite this limitation.

Scott: So far, a lot of this technology has been tested in urban areas where there are intricate detailed maps. So the car knows where every stop sign and every curb and driveway is. But ideally, the cars will be able to go out and just deal with any road they encounter, under any conditions. This seems to get us closer to that reality. What do you think it will take to really get there?

Rus: We need to continue to extend the algorithm in order to get the algorithm to cope with a whole variety of situations, many more than we can cope with right now. Driving on a treacherous mountain road is different than driving through the congested roads of a city. So what we would like is to have the ability to focus the perception algorithm and the control algorithm to the environment the car has to deal with today.

Scott: You’ve said before that anything on wheels can be automated. Are there other applications you see for this technology beyond motorized vehicles?

Rus: I imagine great applications inside your home. Using this kind of automation, the robots could go from one room to another. It could go from the kitchen to the bedroom and back, to collect maybe empty glasses and cups. Also, in hospitals, such a robots could go from one part of the hospital to another to deliver medicine. In the form of an autonomous wheelchair, the robot could even carry patients from their hospital room to, let’s say, the rehabilitation gym.