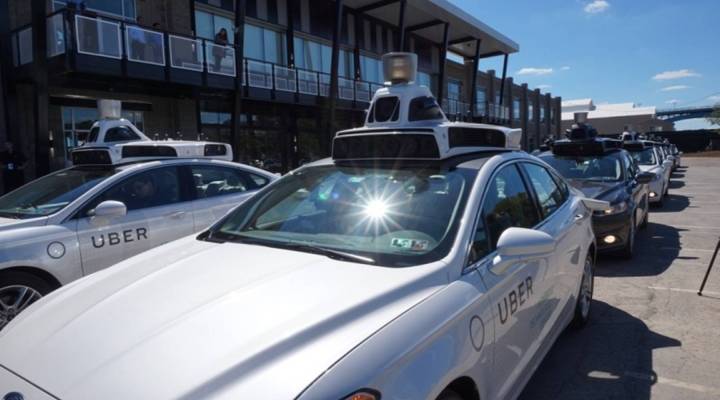 This week, self-driving Ubers started picking up passengers in Pittsburgh. The cars, four Ford fusions loaded with with 20 cameras;  seven lasers and GPS‘s attached to the top; have been  many years in the making, according to Uber engineers.

The cars aren’t fully self-driving just yet. Now, they’re still in trial mode. Pennsylvania law requires a human in the driver’s seat, so two vehicle operators sit in the front. To start a ride from the back, a passenger taps a screen that tells them when the car is autonomous and when the driver starts driving.

The cars are still a work in progress according to Raffi Krikorian, who runs Uber’s Advanced Technology Center.

“We’re still rapidly learning as we’re on the road every single day,” he said.

Krikorian said Pittsburgh’s unique geography is one of the reasons the city is ideal for testing self-driving cars.

The Uber self-driving cars have cameras and GPS equipment on the roof.

For now these rides are free. Uber’s been working on the cars for the past 18 months, since it set up shop in Pittsburgh, seeking to be close to Carnegie Mellon University’s robotics program. Staff there has worked on autonomous vehicles for mining, farming and space. Sixty people from the school left to work at Uber.

Pittsburgh Mayor Bill Peduto said Uber is a catch for the city.

“They have invested a couple hundred million dollars into Pittsburgh and I expect that number to triple or quadruple,” he said.

Of course, not everyone is excited about these cars. Engineers started testing them on the streets in the spring, drawing curiosity and concern.

“I don’t feel safe with that car on the road,” said Lavette Lundy, a hairdresser. “Knowing whether or not it can see me or not see me or if its going to crash like my phone crashes or my computer crashes, my tablet crashes.”

The city has four thousand regular Uber drivers and some are worried. When Nathaniel Morley’s wife went back to school, he started driving Uber to earn more money. A typical shift for him starts off with him cleaning his car. He likes talking to people – and this is the kind of service Morley says will be lost.

“The pluses about Uber is the human element. You have somebody there, for instance if you have people from out of town, they get in the car, they say, ‘Hey, can you suggest somewhere to eat, do you have recommendations for places to see, tourists spots, wherever?'”  he said.

Morley makes around $400 a week driving to supplement his income as a social worker and adjunct professor. It may be a while before he faces competition from driver-less cars.

Pennsylvania’s Department of Transportation is drafting regulations for the vehicles. Uber say it’ll be years before truly self-driving cars are on the road but the first fleet of cars picking up passengers this week are a start.