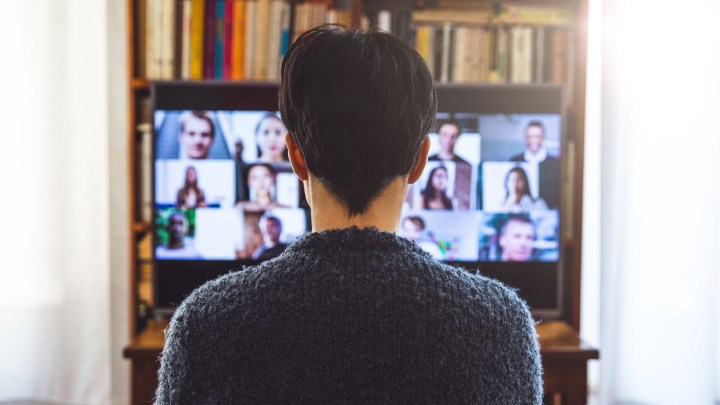 COPY
"When you look at yourself, you evaluate yourself. And evaluating yourself for eight hours a day is not good," said Jeremy Bailenson with Stanford’s Virtual Human Interaction Lab. LeoPatrizi via Getty Images
Workplace Culture

"When you look at yourself, you evaluate yourself. And evaluating yourself for eight hours a day is not good," said Jeremy Bailenson with Stanford’s Virtual Human Interaction Lab. LeoPatrizi via Getty Images
Listen Now

Zoom has become so ubiquitous in the past year that we’re using it as a verb. The videoconferencing platform, reporting quarterly results later today, has also spawned the term “Zoom fatigue.”

That’s a real thing, according to new research from Stanford University. So why is it that the technology can be so draining?

After spending hours a day at a virtual conference recently, Chicago biologist Becca Weinberg had some insights. “I never feel energized on Zoom,” Weinberg said. “But what it does feel is more depleting.”

Weinberg said it makes social interactions awkward, and she feels too self-aware.

Jeremy Bailenson with Stanford’s Virtual Human Interaction Lab said there’s a reason for that. “It’s like being in an elevator where everyone in the elevator stopped and looked right at us for the entire elevator ride at close-up,” he said.

Bailenson said the default display on many programs makes faces appear closer than we’re used to, with unavoidable, sustained eye contact that can be unnerving.

Not to mention being constantly confronted with our own faces. “When you look at yourself, you evaluate yourself. And evaluating yourself for eight hours a day is not good,” he said.

Bailenson said turning off self-view and shrinking down the video window can make interactions feel more natural and less emotionally taxing. He also reminds people that just because they can use video doesn’t mean they have to.