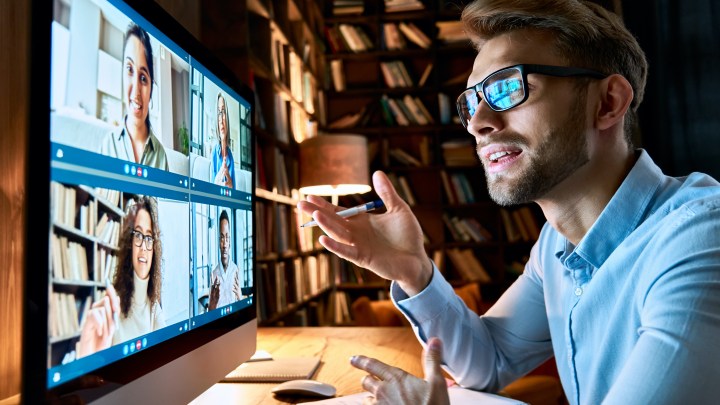 COPY
Video chats work well for one-on-one interaction but not as well when the aim is group collaboration. insta_photos via Getty Images
Workplace Culture

Video chats work well for one-on-one interaction but not as well when the aim is group collaboration. insta_photos via Getty Images
Listen Now

Zoom is still going strong. The video platform beat expectations with its quarterly earnings report Tuesday, though it expects growth to slow from pandemic juggernaut levels. As risks from the virus ease, workers probably won’t throw out their ring lights, but how we use video technology could change.

Much like that 50-pound sack of flour you bought at the start of lockdown, videoconferencing has become kind of stale over the last 14 months.

“I’m on Zoom from about 8 a.m. in the morning, sometimes until 7 or 8 p.m.,” said Kyle Arteaga, who runs a public-relations firm in the San Francisco Bay Area. “I felt like I was living in a screen.”

His company used to have offices in San Francisco, Washington, D.C., and Nashville, Tennessee. He got rid of most of the office space and transformed the firm into a remote-first workplace that he hopes will soon rely less on videoconferencing. He’s planning for occasional all-staff fly-ins and small-group meetups at co-working spaces or coffee shops.

“We’re just going to have to make rules and set parameters over when it makes sense,” Arteaga said.

The technology is going from a substitute for social interaction to just a tool, said Erik Gordon, a business professor at the University of Michigan.

“I think we all learned something about the value of physical presence,” he said. “People who irritated me in my office — I can’t wait to see them again.”

But it doesn’t have to replace face-to-face to be useful, said Tsedal Neeley, a business professor at Harvard.

“It’s additive, it complements, it supplements,” she said. “Even for people who might be co-located, there’s convenience to say, ‘Hey, let’s get on Zoom for 15 minutes and figure something out.'”

Video chatting, she said, has become a reflex we won’t just drop. But we’ll probably use it more sparingly, said Brian Kropp, chief of human-resources research at Gartner.

“What are the tasks and activities and moments where we really need you to be in the office, and what are the ones where you don’t need to be?” he said. “And how do you plan the week around that?”

Video works for one-on-one meetings or presentations, but he said collaboration, introductions and sharing a birthday cake are probably better in person.