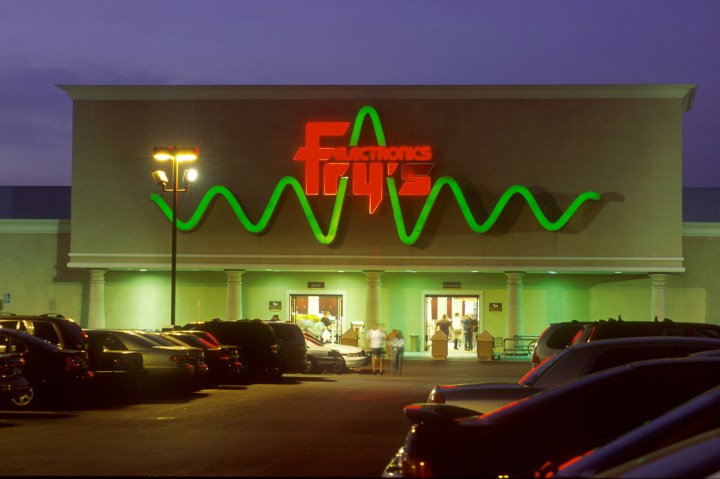 COPY
"It was this magical wonderland where pretty much everything with a power cord was on sale," said Parker Hall, a product reviewer for Wired. David McNew/Newsmakers
Vanishing America

"It was this magical wonderland where pretty much everything with a power cord was on sale," said Parker Hall, a product reviewer for Wired. David McNew/Newsmakers
Listen Now

“Marketplace Morning Report” is going to spend some time in the coming days and weeks looking at “Vanishing America” — parts of the landscape that might disappear in the next 10 years here in the land of Amazon.

One just vanished: Fry’s Electronics, a big-box store in nine states that shut down abruptly this week. Some called it the “Nerd Disneyland.”

Host David Brancaccio spoke with Parker Hall, a product reviewer at Wired, about what the store meant to him growing up. The following is an edited transcript of the conversation.

David Brancaccio: For people who’ve never walked into a Fry’s, what do you think the big deal is? I mean, how many SCSI and USB cords can you look at?

Parker Hall: It’s hard to describe the magic of Fry’s in its heyday, especially if you’ve only been there in recent years, when it sort of lost a little bit of its luster. But it was this magical wonderland where pretty much everything with a power cord was on sale.

Brancaccio: And you would go with your family when you were little?

Hall: Oh, yeah. My dad would make up a random excuse — you know, new TV remote or something — and we would all pile in the car. And it was just this awesome experience. Because it was such a big store — it’s like a Costco-sized warehouse of technology. Everything was on display for you to touch, which isn’t true, I think, even at modern electronic stores. You can’t really actually physically pick something up and mess with it the way that you could at Fry’s.

Brancaccio: I remember it for it being a watershed moment in my relationship with my son, Nick. I don’t remember how old he was, say 12, and he had brought a list of components so that he could build, essentially from scratch, a gaming computer. And this is something I could not do but he could do. So he’s leading me around looking for the graphics cards and the power supplies. And I realized, “OK, he’s in the driver’s seat now.”

Hall: Yeah, yeah, it’s interesting. So I’m probably about the age of your son, I turn 30 this year. And when I was growing up, that was my first experience building a computer was going to Fry’s with my older brother. And he got all the parts just there right off the shelf, and we went home that day and built a computer. And I think that being able to go to a store that carries all of this sort of niche stuff that you need to do that really opened a lot of people’s eyes. I mean, my brother, to this day, he’s an engineer at Amazon. And I don’t think he would have been if he hadn’t wandered through Fry’s and seen all the cool tech that was there when we were kids.

Brancaccio: What do you think? Should we be ashamed that a retail space was important to us like this? I mean, if we’d been saying, “Yes, we went with our family to a national park,” that would be more defensible.

Hall: It’s funny, I’ve been weighing that. And it’s a thing that I deal with a lot in my job as a product reviewer. But I think that a lot of us saw things and discovered possibilities in that retail space that made it something a little bit more than just a place you’d go and buy things.