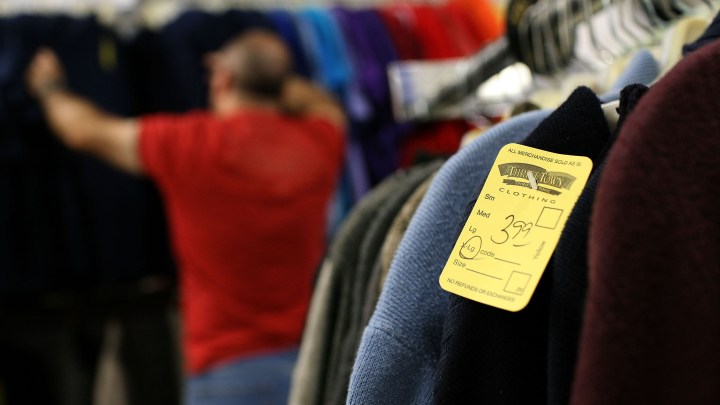 COPY
Like many local shops that live over generations, Thrift Town became a landmark to some in the Sacramento region. Justin Sullivan/Getty Images
Vanishing America

Like many local shops that live over generations, Thrift Town became a landmark to some in the Sacramento region. Justin Sullivan/Getty Images
Listen Now

There’s a small, family-owned thrift store chain called Thrift Town peppered in a few locations around the U.S., but it perhaps made its most memorable mark in Northern California.

Like many local shops that live over generations, Thrift Town became a landmark to some in the Sacramento region, like film director Greta Gerwig. She featured the supermarket-sized El Camino Avenue store in her 2017 movie, “Lady Bird,” one of several iconic sites featured in the film.

Sadly, all of Sacramento’s Thrift Towns are now closed — two shut their doors in 2019 and another did so during the COVID-19 pandemic. While Thrift Town’s few shops in other states are still open, Sacramento residents like Beatrice Hogg really felt the loss.

As part of the “Marketplace Morning Report” series “Vanishing America,” Hogg talked about what made Thrift Town a special space for her. Below is an edited transcript of her story.

Beatrice Hogg: One of my favorite stores that closed down last year was a thrift store called Thrift Town. It was just a cool place to go. I’ve never found anywhere that had the same ambiance and the same friendliness as Thrift Town has. I probably shopped at Thrift Town since the mid-’90s. There were three Thrift Towns in the Sacramento area. At that time I lived near the El Camino Avenue store, which is the store that was featured in the movie “Lady Bird.” That particular Thrift Town was about the size of a supermarket. And they had a lot of clothes, they had shoes, jewelry, furniture, just a lot of different things. I mean, you never knew what you were going to find there. I would spend hours there. Sometimes I would just go there not even intending to buy anything, but just to look around.

And I found a T-shirt that has the name of a musician on it: Dave Meniketti, who is guitarist and lead singer for the band Y&T. Now, I knew I was going to see Y&T soon, so I bought the T-shirt. So when I went to the show and I got a chance to meet Dave Meniketti, he was very impressed. I got a picture taken with him, and I sent it to Thrift Town. And I won the Find of the Week, and they published my picture on their Thrift Town website.

I really miss that store. They decided on June 11 that they weren’t gonna reopen after stores had closed down for the pandemic. And I was just heartbroken. I had certain friends that we would meet there, spend a few hours at Thrift Town, go to lunch and it was a way to go shopping and not spend a lot of money. But it was a way to socialize. I mean, I got to know some of the people that work there and it just had like a family atmosphere. But I have so many things that have that thrift store tag still on them and it just makes me really happy that I was able to be a shopper there for so long. And it just makes me sad that the stores are no longer in California.