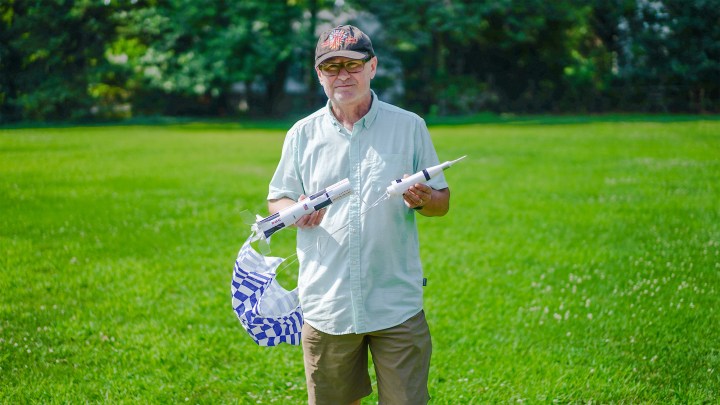 Sometimes places of commerce, from local mom-and-pops to national chains, become something more to us. But amid the birth of ecommerce, the proliferation of big-box stores and now the pandemic, many stalwarts of the American economic landscape have disappeared in recent years. “Marketplace Morning Report” is chronicling some of these places for our series, “Vanishing America.”

“There are very few hobby shops left. It’s sad knowing that these places that were such a source of fun are gone,” Ted Dupont of Montclair, New Jersey, told Marketplace.

As a child, Dupont frequented Dildine’s, a hobby store in Hammond, Indiana. The shop was filled with things he couldn’t see anywhere else: model rockets, trains and airplanes — some with five-foot wingspans — and kits for building them yourself.

“It was fun just building the thing, and then you go out and fire it. It’s just a really exciting thing to see this whoosh of flame and smoke; it smells like sulfur. It goes up a couple hundred feet, and it comes down to earth on this parachute — and it’s ready to go all over again,” said Dupont. “It’s a really wholesome cheap thrill.”

Dildine’s is closed now, but there are still a few hobby shops left standing. One of them is Zeppelin Hobbies in Wayne, New Jersey — not far from where Dupont lives now. A few years ago, as Montclair was gearing up to celebrate the 50th anniversary of the first moon landing by Montclair native Buzz Aldrin and the rest of the Apollo 11 crew, Dupont visited the store in search of a rocket to commemorate the occasion.

He was surprised to find a model of the Saturn V rocket that propelled the Apollo 11 astronauts into space 50 years earlier. Dupont bought it, and a few days later launched the rocket to a crowd of friends and neighbors.

“All of this was prior to the pandemic, but I’ve been thinking a lot about it lately because we’re all doing so much virtual stuff right now. It’s so easy to forget about the satisfaction of using your hands and building something that’s beautiful, and sometimes it actually flies,” said Dupont.

“You can get all that stuff now online, but you’re missing something when you don’t push open a door and go there.”